Accessibility links
Sotheby's to Auction Martin Luther King's Papers The personal papers and correspondence of the Rev. Martin Luther King, Jr., have long been considered priceless. But this week, the King family and the Sotheby's auction house will start the bidding at $15 million.

King delivered his "I Have a Dream" speech in front of the Lincoln Memorial on Aug. 28, 1963. The collection includes a very early draft of this speech, a four-page typed document with King's handwritten notes. Corbis hide caption

From history's vantage point, the Rev. Dr. Martin Luther King, Jr.'s notes, papers and books are priceless. But the King family and the auction house Sotheby's estimate they're worth at least $15 million and possibly twice that. And they're about to go on the block. 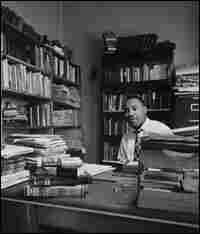 Dr. King in his Atlanta study. King's books are among the items that will be auctioned off by Sotheby's June 30. The 7,000 item collection is on public display at Sotheby's galleries in New York June 21-29. Sotheby's hide caption

Museums and libraries, groups and individuals are busy raising funds to acquire the collection, while Atlanta natives are concerned that a cornerstone of the city's culture is about to be chipped away.

Among the 7,000 items are drafts of famous speeches and sermons, such as "I Have a Dream" and "The Drum Major Instinct." There are papers showing the final revisions to King's "Letter from Birmingham Jail." There's also a college essay that Sotheby's calls his earliest surviving theological writing.

The collection goes on public display at Sotheby's New York galleries starting June 21. It will be auctioned off on June 30.

The King family has stipulated that the collection be sold as one block. It cannot be broken up while King's children are still alive.

Redden says the documents are ideal for display.

"He wrote on one side of sheets of paper," Redden says, "so you can actually put an entire speech on the wall and frame it like precious works of art and read it from start to finish."

Several years ago, Sotheby's pored through the collection, most of which comes from the late Coretta Scott King's home and King's personal library. Sotheby's tried to broker a sale for the King family, but some potential buyers -- such as the Library of Congress -- balked over price and stipulations.

The auction was announced this month and reaction was swift. Andrew Young, a King aide during the civil rights era, went on to serve as mayor of Atlanta and U.S. Ambassador to the United Nations. He wants the collection to stay in Atlanta. He told The Atlanta Journal-Constitution that losing the collection would rob Atlanta of its heritage.

"We want our children to understand that heritage," current Mayor Shirley Franklin says. "And these would be a special way to celebrate the heritage of the civil-rights movement in Atlanta."

Discussions are underway involving the public and private sector; Atlanta's Emory University has offered to take part. But with the auction quickly approaching, Franklin is careful not to let on exactly what's being planned.

It's believed that New York's Schomburg Center for Research in Black Culture is interested. But New York Mayor Michael Bloomberg is also reticent.

"Historians and librarians are interested," Bloomberg says. "It'll be one of the major collections that people will look to see if they can afford to collect."

One of the considerations for bidders -- and especially the cities involved -- is tourism and commerce. The permanent home of the collection can expect plenty of visitors, especially since the King family has put limits on how much can be shown on the Internet or in catalogs.

The Auburn Avenue Research Library on African-American Culture and History, located on the street where King grew up and later rose to prominence as a young preacher, hopes to provide a home for the documents. The library is close by the King Center, which is devoted to King's life and legacy. But the Auburn Avenue library doesn't have millions of dollars sitting around, so administrator Francine Henderson is making a lot of phone calls.

"I very strongly feel that the money is there. How to quickly get it is a question that we are concerned about," says Henderson. The library says it would offer a fitting legacy to King.

"If you want to make an argument to say he existed beyond boundaries, that's fine," says Williams. "But he was born in Atlanta and born on Auburn Avenue, and there's something to say about coming full circle."

Sotheby's Catalog of the MLK Papers