Accessibility links
Health Cuts Create Dilemma for Tennessee's Poor New limits on Tennessee's health coverage for the poor has created a painful dilemma for many. If you have restricted insurance, but several chronic illnesses, as Linda Warner does, how do you choose which one to treat? 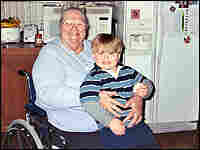 Linda Warner found herself in a dangerous bind earlier this year. She developed strep throat, along with kidney and bladder infections. She had to choose between antibiotics and the regular medicines she takes for her chronic illnesses. Julie Rovner, NPR hide caption 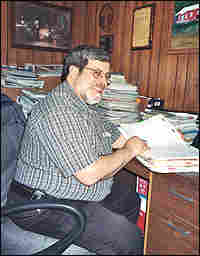 Dr. Edward Capparelli spends a good deal of his time on a task he wasn't taught at medical school: helping patients strike a balance between the medicines they need and what they can afford. Julie Rovner, NPR hide caption

Now Tennessee is again drawing attention; this time for revoking that guarantee. Last August, some 200,000 people were cut from its "TennCare" program. And more than half a million more are living with new limits on their health care.

Linda Warner is one of those half a million. She lives in a double-wide trailer on top of a hill overlooking the Great Smoky Mountains in Cocke County, one of the state's poorest. The trailer is comfortable inside, if a bit cramped. The walls are covered with pictures of her children and grandchildren. Scattered on the shag carpet are dozens of toys that belong to her three-year-old great-grandson, Bryson.

Warner looks after Bryson most weekdays. His father, Linda's grandson, drops him off each morning at 4:30 a.m., before driving 1 1/2 hours to his job. To be able to afford Bryson's health insurance, his mother works full-time as a hospital clerk. She's also studying to be a nurse.

But even though Linda Warner is in a wheelchair, living on $600 a month in disability payments, she still makes time to help those in her community who have even less.

"I'm not totally useless yet," she says. "A lot of people see me sitting in a (wheel) chair and think I'm dead weight. Well, I'm not really dead weight. I'm involved in our church... I work many many hours and still volunteer."

Warner says she's not letting her disabling health problems get in the way. She's had three failed joint-replacement surgeries and a case of pneumonia that has made it hard for her to breathe.

TennCare now limits adults to five prescriptions per month, and only two of them can be brand-name medications. That's one of the tightest limits anywhere in the country.

It has forced Warner -- who was taking eight different medications -- to make some painful choices.

She goes down the list of medications she's had to give up.

"I stopped taking the antidepressant," Warner says, "the medicine I took for my stomach because I had serious gallbladder surgery. The hormones to stop all the hot flashes, I don't get it anymore. It's over my limit."

For most of the fall and winter after the cuts, things were bearable. Then in February, Warner got sick.

But the fever didn't go away. And she had already reached her five-prescription limit for the month, so she resisted her family's urging to go see her doctor.

"My daughter said, 'Please mom, please! You're not getting better.' I said, 'I understand that, honey.' "

In an attempt to put her daughter off, Warner said she couldn't get an appointment.

"That wasn't true. I can get an appointment anytime I call," she says. "But there's no sense in going to the doctor, if you can't get the medicine."

But by early March, Warner wasn't much better. And when her fever reached 103, it was time to get help. "I went to see Dr. Williams, and it was on a Thursday," she recalls. "And he fussed at me, and asked why I waited so long before I came to see him."

It turned out she had strep throat, as well as kidney and bladder infections. The doctor gave her a couple of injections, which don't count against her monthly drug limit. But he also gave her two prescriptions for antibiotics, which do.

"So that means I have to decide for the month of March what I'm going to do without," she says.

Warner's doctor James Williams says she's hardly the only one of his patients with these problems.

"I see it all the time," he says. "Patients who don't come in at all and you never know what happened to them. Then they show up critically ill in the emergency room with congestive heart failure or have had a heart attack, or terrible pneumonia; or their diabetes is out of control; their thyroid's out of control because they haven't taken their medicines."

Meanwhile, Warner gathered up all her prescriptions and her portable wheelchair, climbed in her car, and went to the drugstore.

She gave the pharmacist her prescriptions, but told him not to fill the bladder medicine. Normally, she takes it four times a day.

"It stops me from wearing a diaper, a disposable diaper," Warner sighs. "I really hate to do without the bladder medicine because I can't go anywhere without it."

Along with the bladder medicine, she decided to skip her pain medication for the month. That way TennCare would cover the $28 worth of antibiotics she needed.

"You have to choose," Warner says. "And I have to have the inhaler ... because I have to breathe. It's OK that I'm wet, but I got to breathe."

Down the highway a few miles from her hilltop trailer, Dr. Edward Capparelli is going through a stack of files from patients in the same situation as Warner.

"It's very frustrating," says Capparelli, who practices family medicine at a community health center in Parrotsville. "It's especially frustrating to know that some of the medications we're choosing to leave out have long-term health implications. So are we providing what would be the best care? No."

In fact, says Capparelli, since the drug limits took effect, he's spent almost as much time figuring out how to take people off medications as figuring out which medications to put them on.

"This is a real problem because the clock resets on the first of the month," says Capparelli. "So if you happen to get your meds on the first, and then on the 15th you get sick, you really are not allowed to get any more prescriptions on that limit until the first of the following month."

Capparelli says that for relatively healthy people, the five-prescription limit hasn't been much of a hardship.

"But for people who have more than one chronic illness, it's impossible to try to pick which is more important," he says. "And unfortunately, physicians have often had to choose for what's life-threatening today and give up on what might be life-threatening tomorrow."

An example would be keeping a patient on the blood thinner Plavix, for example, to prevent a heart attack, instead of a drug to prevent bone fractures from osteoporosis. "Osteoporosis won't kill them tomorrow. A heart attack might," says Capparelli.

This isn't a skill he learned in medical school.

"There's no way to teach that, and I don't think any two people sitting down would make exactly the same choices," Capparelli says. "Still, we're making the best of a series of bad decisions. And certainly there's no way to predict that the drugs we're taking them off might not have some dire consequences for the patient down the road. You just have to make decisions and hope for the best. "

Fearing for the Future

Meanwhile, Warner dreads the possibility that she'll get sick again.

"I remember laying there with a high fever, praying a lot, (saying) 'You know, God, I know it's your will. Your will will be done. But isn't it enough that I don't walk? Do I have to be so sick? For a $28 dollar prescription I was sick for that long?' "

And Warner says she really did not have the $28.

Warner won't take money from her children, who work long hours and barely get by themselves.

"How do I ask a boy who's paying $150 for his son's medicine, or Cindy who's paying $92 for her daughter's medicine, to make them do without for me? They're children, so they can't cope. I'll sit on a waterproof pad all day, if necessary, but I won't ask children to do that," she says.

In fact, what pains her most about her ill health is how it stops her from helping others.

That ripple may be hurting people like Warner, her family, and her community, but it's helping Tennessee's bottom line. Last year's TennCare cuts helped produce a $266 million budget surplus. The cuts saved so much that Democratic Gov. Phil Bredeson is looking to put some money back into health care.

But the governor says his first priority is not to help people like Warner, who are struggling under the TennCare limits. Instead, he's aiming at the 600,000 to 700,000 Tennesseans who currently have no health insurance at all.

"It's always stuck me as odd that we argue about whether somebody gets five, six or seven prescriptions in one group of people, and totally ignore several hundred thousand other Tennesseans who are also uninsured and who get cancer or high blood pressure or heart disease, too," says Bredeson.

"What I'm trying to do is get the basic, most important benefits into the hands of every Tennessean who needs them before we worry about the fringes and the add-ons of any one given insurance program," Bredeson says.

The governor says while he's sympathetic to Warner's plight, TennCare had simply become too expensive for the state to support.

"We're trying to address these issues in a reasonable, sensitive way," Bredeson says. "And I think (we) are frankly doing a better job than a lot of the big states in terms of what we are able to provide."

The state has announced it will ask the federal government for permission to relax some of the prescription limits for those on TennCare. But even if those changes are approved, it's not clear whether Warner's case will be "unique and complicated enough" to allow her to get all the medications her doctor prescribes.