Accessibility links
A Final Word with President's Faithful Speechwriter President Bush's outgoing speechwriter says religious references play a key role in the president's dialogue. In that regard, Michael Gerson says, Bush is no different from Presidents Kennedy and Franklin Roosevelt. 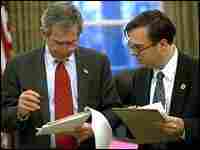 President Bush reviews the text of his State of the Union speech with Michael Gerson in the Oval Office, Jan. 23, 2003. Scroll down for highlights of President Bush's speeches. Eric Draper/White House hide caption 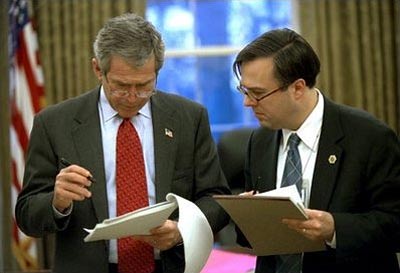 President Bush reviews the text of his State of the Union speech with Michael Gerson in the Oval Office, Jan. 23, 2003.

Michael Gerson might be the highest-profile ghostwriter in the country. Over the last seven years he has written most of President Bush's important speeches, including two inaugural addresses, the president's much-admired speeches after the Sept. 11 attacks, as well as several State of the Union messages and many, many policy statements.

Gerson has been called the moral compass of the White House, a policy provoker; certainly he's a phrasemaker to the president -- starting with "the soft bigotry of low expectations," a passage from the speech Mr. Bush gave when he announced his intention to run for president.

"It's half writing, and it's half diplomacy."

How Presidential Speeches are Drafted

"It means standing for the weak and the suffering and the oppressed here and in other countries."

As he prepares to leave the White House later this month, the speechwriter and policy adviser looks back at his five years of work with the president.

Gerson says Bush's frequent religious references are not much different from other presidents.

There's a "new Evangelical approach to social justice that is broader."

But Gerson says that while Bush used religious language, the White House strived not to be sectarian. "The goal is to be welcoming to all faiths and their important role in our common life. But it is a real mistake to try to secularize American political discourse…" 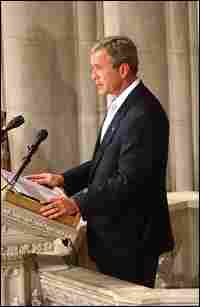 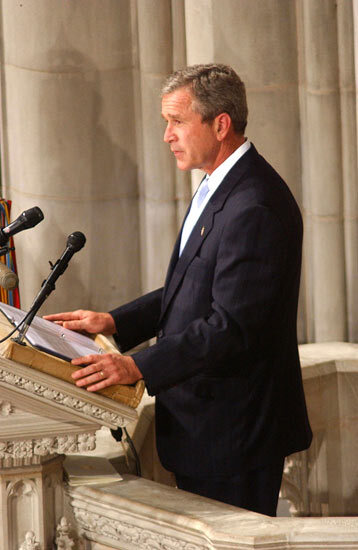 Following are highlights of key speeches by President Bush during the tenure of speechwriter Michael Gerson: