Listen
Toubab Krewe: All the World at Once

Toubab Krewe: All the World at Once 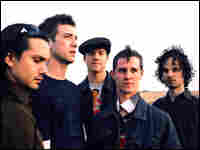 Long-time friends Justin Perkins and Drew Heller had been playing together in various bands for a few years, until an invitation to study music in West Africa with the dance and drum ensemble Common Ground gave them the inspiration they needed. The two teamed up with Common Ground founders Teal Brown and Luke Quaranta, and in 2004, Toubab Krewe's experimental sound was born. After adding bassist Dave Pransky, the quintet was complete and ready to record. The group's self-titled debut album reworks nine traditional West African instrumentals and includes one original. By not confining itself to one genre, Toubab Krewe has the potential to bring its worldly and unpredictable music to a mainstream audience.