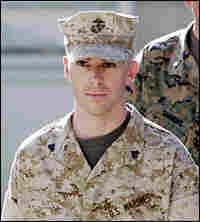 Cpl. Marshall Magincalda, Jr., walks into the courtroom at the Camp Pendleton Marine Corps Base in California on Aug. 30, 2006. He is one of seven Marines and one Navy medic who are charged in the death of Hashim Ibrahim Awad in Hamdania. Hector Mata/AFP/Getty Images hide caption

U.S. forces are accused of killing an Iraqi civilian in Hamdania, a city west of Bahgdad. Criminal charges have been filed in the case.

April 26, 2006: Seven Marines and a Navy medic patrol Hamdania, a city west of Baghdad, for a suspected insurgent. They do not find him and instead, allegedly enter a nearby house, remove an Iraqi man, take him away and shoot him. They allegedly leave a shovel and an AK-47 assault rifle to make it look like the man was an insurgent.

May 1, 2006: Local Iraqis bring the April 26 incident in Hamdania to the attention of Marine leadership at a regularly scheduled meeting. A preliminary investigation finds that sufficient information exists to recommend a criminal investigation.

May 24, 2006: The commanding general of the Marines in Western Iraq, Richard Zilmer, requests the Naval Criminal Investigative Service (NCIS) proceeds with a criminal investigation into Hamdania.

June 21, 2006: Seven Marines and a Navy medic are charged with murder in the April 26 incident in Hamdania. All eight also are charged with kidnapping, conspiracy, larceny and providing false official statements. The eight men are attached to the 3rd Battalion, 5th Marine Regiment based at Camp Pendleton in California.

Aug. 30, 2006: Article 32 hearings at Camp Pendleton, Calif., begin for two Marines, Cpl. Marshall Magincalda, Jr., and Pfc. John Jodka III. They are among seven Marines and a Navy medical corpsman who are charged with murder and kidnapping in the death of Hashim Ibrahim Awad in Hamdania. The hearings are the military equivalent of a grand jury, in which charges are considered and evidence and witnesses reviewed. At the conclusion, a hearing officer begins to draft a report on whether the soldiers should face courts martial. Other hearings are scheduled through October.