A Classic Breakup Song Gets Its Answer

A Classic Breakup Song Gets Its Answer

Lloyd, I'm Ready to Be Heartbroken

Popular musicians long ago began producing the occasional "answer song" in response to the work of another artist. Some of the most popular examples take place in hip-hop -- for example, "Roxanne's Revenge" by Roxanne Shante, a reaction to UTFO's "Roxanne, Roxanne" -- though some would argue that the lyrical battles John Lennon and Paul McCartney waged in their post-Beatles answer songs were even more intense. 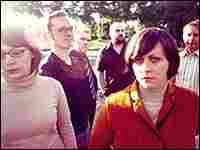 Sophisticated pop that draws on the charm of Belle and Sebastian, as well as the classic girl-group hits of the '60s, "Lloyd, I'm Ready To Be Heartbroken" functions as both a response to Cole's song and as a fine contribution to any mix CD that also includes Dusty Springfield's "I Only Want To Be With You." Both are ideal companions, if not cures, for the breakup blues.

Album
Let's Get Out of This Country
Artist
Camera Obscura