Accessibility links
A Historian's Pivotal Take on Theodore Roosevelt For decades after his death, Roosevelt was regarded as a hyperactive New York swell. It wasn't until John Morton Blum published The Republican Roosevelt that Roosevelt assumed his stature as a force to be reckoned with in the Oval Office. Political historian Lewis Gould talks about the impact of Blum's study. 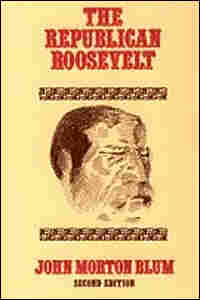 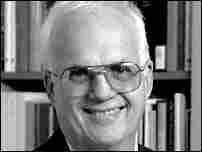 Lewis Gould, an emeritus professor of history from the University of Texas, is the author most recently of The Most Exclusive Club: A History of the Modern United States Senate. Gould also has authored a political appreciation of TR in The Presidency of Theodore Roosevelt, as well as A Grand Old Party: A History of the Republicans. He had Karl Rove as a student in 1998, when Rove was seeking to complete his undergraduate degree with a paper on Teddy Roosevelt and the election of 1896 — an experience that later prompted Rove to make the case for George W. Bush "as a latter-day William McKinley."

Theodore Roosevelt was in many ways the Central Casting version of the modern president: grinning, pounding the podium, making the "big stick" the basis of U.S. diplomacy, and deriding "malefactors of great wealth." Even now, he continues to enamor chroniclers and opinion-makers -- next week, Time magazine devotes a comprehensive special issue to TR and his legacy.

Yet it has not been ever thus. For decades after his death, Roosevelt was regarded as a hyperactive New York swell more than as a serious statesman. It wasn't until 1954, when a young historian named John Morton Blum published The Republican Roosevelt, that Roosevelt assumed his stature as a force to be reckoned with in the Oval Office, as well as on the battlefields of the Spanish-American War.

Building on his work as a co-editor of Roosevelt's newly published letters, Blum argued that Roosevelt possessed a strong genius for the art of governance, as well as a sharp instinct for getting the upper hand in advancing his legislative agenda through Congress. NPR talked about the impact of Blum's study with political historian Lewis Gould.

Q. In what sense was the Teddy Roosevelt in Blum's book a new Roosevelt -- new to both you, and historians of the American presidency more broadly?

A. In 1960, when I first read The Republican Roosevelt as a junior at Brown University, I, like many other students at that time, understood Theodore Roosevelt as something of a perennial adolescent in the White House. This was what teachers had largely told me about TR, and that impression derived in turn from their reading of Henry Pringle's prize-winning biography of Roosevelt, published in 1931. Pringle's book solidified the view that TR had been fun to watch but ultimately inconsequential in the nation's history.

As I read and then re-read Blum in the years that immediately followed, a different Roosevelt emerged: complex, thoughtful, energetic, and adept in the uses of power. The Republican Roosevelt is a book of a young historian (Blum was 33 years old when it was published) whose immersion in Roosevelt's letters as a co-editor of the eight-volume The Letters of Theodore Roosevelt filled him with fresh insights about his subject. The book sparkled with energy and wit; Blum enriched the text with allusions and puns. He noted, for instance, the genteel expectation that wealthy young men like Roosevelt were not to enter politics "among the cuspidors of garish hotels where the cigar-smoking, whisky-drinking evil old men of the parties made their dull deals" -- a reference to a famous quote from the anything-but-genteel labor leader John L. Lewis about FDR's onetime vice president, John Nance Garner.

Beyond his deft prose, Blum made the case, in the face of a generation of condescension about Roosevelt, that presidents made a difference and that Roosevelt was a serious statesman who had lessons to teach for the generation of the 1950s and beyond. That combination made for a stimulating reading experience for the many students who delved into The Republican Roosevelt in that generation. Several chapters became classic set pieces of political analysis.

The fourth chapter, "President and Party," depicted Roosevelt in his "happiest campaign" wresting control of the Republicans from William McKinley's political friend, Marcus A. "Mark" Hanna. Even more influential was the chapter that followed on "President, Congress, and Control." Blum took the episode of the passage of the Hepburn Act of 1906 to regulate railroads and turned it into a riveting legislative drama. In this story, a deft president, confronted with the opposition of such Senate grandees as Nelson Aldrich (R-RI) and John Coit Spooner (R-WI), found ways through public appeals, backstage negotiations, and adroit legislative tactics to get a workable regulatory bill through a reluctant Congress. So compelling was the story that Blum recounted that it passed almost at once into textbooks and lectures as a definitive account of this kind of presidential leadership. Half a century later, it remains one of the best brief narratives of how Congress worked in the Progressive era.

Q. Given the present level of discord in today's Republican party, would there be any likelihood of a revived TR-style Progressivism in its ranks, with, say, John McCain at the helm?

A. Roosevelt was a Republican who believed (and could believe) in governance in office. Members of the GOP in those days also thought that they were inherently better at this process than the Democrats were, as Roosevelt's later strictures about Woodrow Wilson demonstrate. In contrast, today's party cannot demolish government so instead it administers it poorly, takes profits from appropriations and offices, and runs against government on the stump. When Roosevelt said in 1912 that "in the long run, this country will not be a good place for any of us to live in unless it is a reasonably good place for all of us to live in," he spoke in cadences that I cannot hear anywhere in the modern GOP. John McCain might be able to lead a return to an involvement with making policy work, but he would have to do so against the dominant impulses of his party at this time.

Q. So much of Blum's book stresses how Roosevelt embodied a certain austere upper-class ethos of self-control, especially amid unthinkable personal tragedies such as the near simultaneous deaths of his wife and mother. What, in your view, accounts for the seeming lapse of that control in his later career, when he mounted a destructive third-party run for the presidency in 1912 and met with a premature death in a foolhardy effort to enlist in the army to serve in World War I?

A. I have argued that after the presidency Roosevelt found himself in the new position of being a political celebrity, in which he felt the pressure to keep himself in the public eye and the people entertained. In 1912, he had this exchange with a reporter who congratulated him on the reception he received at a rally: "'Barnum and Bailey,' he said, his voice rising shrilly. 'Pure Barnum and Bailey. It's my past that brings them; not my future, a trap for politicians like myself.'" An oft-quoted comment of Roosevelt from his youth is that "Black care rarely sits behind a rider whose pace is fast enough." But it caught up with him between 1909, when he left the presidency and 1919, when he died. Let me give John Blum's eloquent prose the last word on Roosevelt: "He took up arms against a sea of troubles, and by opposing lost too much. Perhaps he can now be forgiven. Surely he can be mourned."