Warning: getimagesize(https://media.npr.org/blog/june/22/shells200x150-ae40b9500b39d97477911cbdc3ee0400c80edc5d.jpg): failed to open stream: HTTP request failed! HTTP/1.0 404 Not Found in /var/www/html/src/Views/CommonJsonldView.php on line 87
 Shell Necklace a Sign of 100,000-Year-Old Culture : NPR
Accessibility links
Shell Necklace a Sign of 100,000-Year-Old Culture Scientists have found evidence that modern human culture dates back at least 100,000 years. The evidence is in the form of ancient shells collected at sites in Algeria and what is now Israel. The shells were perforated, apparently for use as personal decorations. Archeologists say that suggests people were expressing themselves with symbols -- something associated with modern human culture.

Scientists have found evidence that modern human culture dates back at least 100,000 years. The evidence is in the form of ancient shells collected at sites in Algeria and what is now Israel. The shells were perforated, apparently for use as personal decorations. Archeologists say that suggests people were expressing themselves with symbols — something associated with modern human culture. 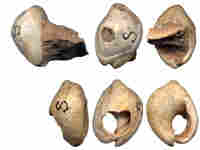 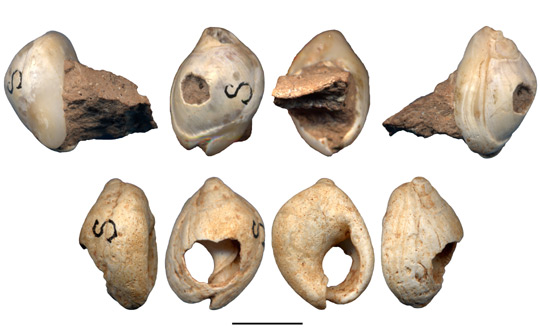 The two perforated shell beads found in what is now Israel, shown at different angles.

And I'm Robert Siegel. Scientists have found evidence that the human urge to create art dates back at least 100,000 years. They have found snail shells that ancient humans appeared to have fashioned into decorative beads.

JON HAMILTON: Archaeological discoveries are supposed to require lots of tedious digging. This one didn't. A French scientist named Francesco d'Errico ran into a friend at a conference. They got to talking about some snail shells at a museum in London. The friend said -

FRANCESCO D: Why don't you come to London and try to see whether you can make something out of it. So, in fact, it was very easy way.

HAMILTON: A British archaeologist had actually dug up the snail shells in Israel in the 1930s. The shells eventually landed in London's Natural History Museum, where they didn't get much attention.

Until a few years ago. That's when d'Errico and other scientists found 41 similar shells in South Africa. The South African shells had holes in them and they'd apparently strung together as beads.

D'Errico says they were in layers of earth that also contained tools and pigments used of painting.

ERRICO: And these layers are dated by two different dating methods. It's around the 75,000 years ago.

HAMILTON: That made the shell beads the earliest known example of personal decoration, a hallmark of modern human culture. But d'Errico thought there might be even older shell beads somewhere else. So he accepted his friend's invitation to check out the shells in London. It turned out that two of them had holes punched in them, just like the ones in South Africa. But tests showed they were 25,000 years older than the South African shells.

Then d'Errico found another shell bead in a museum in Paris. It's from Algeria and may be 90,000 years old. And d'Errico says he knows about some other ancient shell beads.

ERRICO: And I cannot say too much about it because otherwise the colleagues in Rome, they will probably kill me.

HAMILTON: The shell beads are just the latest finding that may help explain something called the creative explosion. It was a burst of sophisticated tool making and art in Europe that signaled the arrival of modern humans.

CURTIS MARION: When they moved into Europe 40,000 years ago, bam, they start to express themselves in a very complicated way through their material culture.

HAMILTON: They made cave paintings, jewelry, musical instruments. What changed probably wasn't the people, but the weather. And Marion says humans tend to produce a lot more cultural artifacts when it's cold out.

MARION: Go into a museum Sunday and take a look at the material culture of the Eskimo. I mean, it's extremely complex with carved figurines and all kinds of stuff like that. And that's not the case with tropical hunters and gatherers.

HAMILTON: They just don't leave much behind. And Marion says that's why the shell beads from Israel and Algeria are so interesting. The beads are described in this week's issue of the journal Science.