Accessibility links
Best of Both Worlds from Roy Hargrove Trumpet player Roy Hargrove has two bands — one a straight-ahead jazz combo, the other a soul-tinged R&B band. Instead of choosing one or the other, he recently decided to release two very different CDs simultaneously.

Listen
Best of Both Worlds from Roy Hargrove 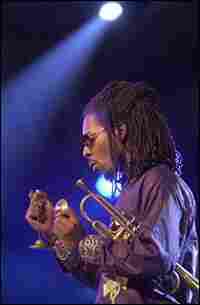 Roy Hargrove, pictured here performing at a jazz festival in Spain, is releasing both a traditional jazz CD and an R&B album at the same time. Gorka Ayestaran/EPA/CORBIS hide caption

Jazz trumpeter Roy Hargrove is known best for his straight-ahead and bebop jazz albums, recorded with his acoustic quintet. But the versatile musician also has a band called RH Factor which plays a funky mixture of '70s R&B, soul and jazz.

Instead of deciding which direction to go for his latest project, Hargrove recently released two CDs simultaneously -- one by each of his bands. Hargrove grew up in Dallas listening to his father's funk and R&B records, but his biggest musical influence was a high school teacher who introduced him to traditional jazz.

He rejects critics who say he records R&B records simply because jazz records don't make as much money. Being able to play and record both, he says, just feels natural. "I feel this music, that's why I do it," he says about his RH Factor CDs. "It's about as simple as that."

The straight-ahead jazz release, Nothing Serious, features a mix of Latin-tinged, upbeat tunes and soft ballads. Hargroves solos on trumpet and flugelhorn are graceful and melodic. On Distractions, the RH Factor CD, the jazz influence is kept to a minimum -- except maybe for the sophisticated chord progressions and tasteful background horn lines provided by Hargrove and fellow Texan David "Fathead" Newman.

Nothing Serious doesn't push the envelope of the post-bop jazz genre, and Distractions doesn't have the hip-hop flavor that other R&B groups are exploring. But what Hargrove and his bands deliver are sweet acoustic jazz and neo-1970s soul, played in easily digestible bite-sized pieces by self-confident master musicians.