Accessibility links
Suncreens Can't Live Up to Promises, Lawsuit Says Companies that make sunscreen products are facing a class-action lawsuit that alleges false advertising. The attorney who filed the suit says the the products don't do a good job of blocking A-type ultra-violet rays, the kind that causes the most serious skin cancers. 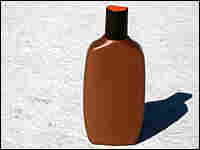 A series of lawsuits, recently consolidated in California, charge that the makers of sunscreen aren't delivering all the protection that they promise. iStockphoto.com hide caption

Sunscreen labels promise "waterproof, all-day sunblock." But those claims are now being challenged in a lawsuit in California. Attorney Mitchell Twersky is suing the makers of Hawaiian Tropic and other popular sunscreen brands on behalf of customers who, he says, have been misled.

"They've been given the false sense from these labels and advertising that you can put some of this stuff on their kids in the morning, send their kids out to play, splashing around in a pool, and they're fully protected for a full day's activity. And it's simply not true," Twersky says.

Twerskey argues that despite what the labels say, sunscreen is not waterproof, and it doesn't last all day. What's more, even though the label promises protection against two kinds of ultra-violet rays -- UVA and UVB -- he says the protection against UVA radiation is much weaker. In fact, he claims one of the ingredients commonly used to block UVA actually breaks down quickly when it's exposed to sunlight.

UVA does not cause sunburn like UVB, but it's still dangerous and contributes over the long term to melanoma, a potentially deadly form of skin cancer.

Dr. Stephen Stone, who heads the American Academy of Dermatology, says that there is no SPF-style measurement of protection against UVA.

"Part of the problem is that UVB -blocking is obvious. You and I will know whether our sunscreen is blocking UVB if we got to the beach and we don't get burned," Stone says. "Whereas it's hard to tell subjectively how much of the UVA is being blocked out by our sunscreen."

The number of melanoma cases has been on the rise since the early 1900s. Twersky suggests that sunscreen may be having a perverse effect, allowing unwitting users to spend too much time in the sun.

"Before the use of sunscreen was prevalent, people knew to get out of the sun because they knew that they would get burned. And burning is the body's natural warning system," Twersky argues.

The company behind Coppertone sunscreen says that Twersky's claims are without merit. Schering Plough says it tells customers that sunscreen should be used along with other measures, such as wearing protective clothing and limiting their time in the sun.

Schering Plough declined to talk on tape, but like other companies named in the lawsuit, it says its product labels comply with regulations of the FDA.

In 1999, the FDA proposed tighter regulations that would have outlawed terms such as "waterproof," "all-day protection," and "sunblock." But the industry lobbied successfully to keep that rule from taking effect.

The FDA says it is working to publish a new rule that would include a standard for measuring UVA protection. Dr. Stone says that, as a dermatologist, he'd like that.

"Either the FDA or the industry is going to have to come up with some absolute definitions of these terms," Stone says.

In the meantime, Stone recommends applying and reapplying sunscreen liberally, wearing a broad-brimmed hat, and staying out of the sun during the middle of the day.