Accessibility links
Palestinian Attack, Kidnapping Angers Israel Israel is demanding the release of a soldier captured during a raid by Palestinian gunmen Sunday at a Gaza border crossing. The attack killed two Israeli soldiers and was the first such ground assault since Israel pulled out of Gaza last summer.

Israel is demanding the release of a soldier captured during a raid by Palestinian gunmen Sunday at a Gaza border crossing. The attack killed two Israeli soldiers and was the first such ground assault since Israel pulled out of Gaza last summer. 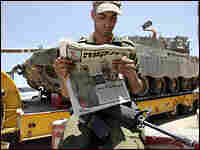 An Israeli soldier near the Gaza border reads a newspaper on Monday with a picture of Gilad Shalit on the cover. Menahem Kahana/AFP/Getty Images hide caption 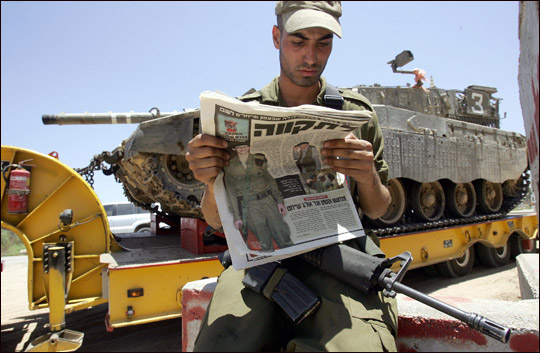 An Israeli soldier near the Gaza border reads a newspaper on Monday with a picture of Gilad Shalit on the cover.

Israel's Prime Minister, Ehud Olmert, has placed the army on alert for what he described as a protracted operation against Palestinian militants. The order was issued one day after Palestinian gunmen killed two Israeli soldiers. The Palestinians also captured a third Israeli soldier at an Army outpost near Israel's border with Gaza. And it's near that border that Israeli troops and tanks are now massed.

A large Israeli infantry force backed by tanks is poised to enter Gaza for the first large-scale Israeli ground operation into Gaza since the Israeli withdrawal from the strip last summer. But military sources say a ground operation is on hold, at least for now, after Israeli officials gave the gunmen 48 hours to return the captured Israeli soldier. Palestinian officials say they are also trying to find him.

At a news conference in Gaza, Hamas spokesman Ghazi Hamad called on militant groups to treat the soldier well. He also said an intensive international diplomatic effort is under way and called on Israel to act with restraint.

Mr. GHAZI HAMAD (Spokesman, Hamas Organization): We ask the Israeli government not to go to the military escalation in order not to make the situation more complicated.

GRADSTEIN: Israeli officials say they hold both Hamas, which was one of three groups that claimed joint responsibility for the attack, and Palestinian leader Mahmoud Abbas responsible for the soldier's welfare.

Last night, Prime Minister Ehud Olmert said, quote, the age of restraint has come to an end. He said Israel will respond forcefully. Olmert also said that Israel will not release Palestinian prisoners in exchange for the soldier's freedom.

But Matthew Gutman, a reporter on Palestinian affairs for The Jerusalem Post, says that may change over the next few days.

Mr. MATTHEW GUTMAN (Reporter, The Jerusalem Post): Israel often does pay to get hostages back, living or dead, and often pays exorbitant prices for it -probably prices that other countries wouldn't pay, in terms of both money and other prisoners. And it could be that Israel does strike some sort of deal with whatever groups are involved in this kidnapping and returns hundreds of Palestinian militants to Gaza or the West Bank.

GRADSTEIN: Israel's chief of staff appointed a senior military official to investigate yesterday's attack in which seven or eight gunmen used an 800-meter-long tunnel to attack the Israeli army post near Israel's border with Gaza and Egypt. The gunmen surprised the Israeli soldiers at the outpost. In a well-planned, three-prong attack, they fired missiles at an Israeli tank, killing the two soldiers and capturing the third, attacked an armored personnel carrier, and attacked a tower.

At least two of the gunmen were killed, but the others escaped back to Gaza via the tunnel. An Israeli army spokesman said the tunnel had been under construction for many weeks and that the gunmen also wore Israeli army uniforms, which added to the confusion.

Israeli security officials said they had intelligence warnings of a possible attack in the area, and the nearby Kerem Shalom crossing point for cargo between Gaza and Israel was closed for several days last week. Israeli officials say their first priority now is securing the release of the captured soldier, either by mediation or by an Israeli military operation.