Accessibility links
Giving a Name to the Pain of Losing a Child Commentator Karla Holloway wishes there was a word to describe parents who've lost a child. Perhaps the word itself can help begin the healing. Holloway is the author of Passed On: African-American Mourning Stories.

Listen
Giving a Name to the Pain of Losing a Child

Commentator Karla Holloway wishes there was a word to describe parents who've lost a child. Perhaps the word itself can help begin the healing. Holloway is the author of Passed On: African-American Mourning Stories.

There's grief. There's sadness. There's anguish. But sometimes, there are no words to describe a loss.

Commentator Karla Holloway says, in her case, there should be one.

Ms. KARLA HOLLOWAY (Author): Although Mother's Day, Memorial Day and Father's Day have passed, there are remains of these days, an absence without a word and without a name, nothing to displace my struggle to say, to explain, that I had, there were, once, when we were whole, there were two children. But one of my children has died and we are, I am, what? Why is there no language to identify us?

I knew what I was when my last parent died. When we stood at our father's casket, my sister and I both knew the word: we were orphans. Adults with families of our own and extended kin, but at that moment, orphaned. It was a loss our language could locate and name, being able to pronounce this as our identity.

And last year, when my sister suffered the death of her husband, she was immediately and publicly a widow. Many years ago, I heard Ladybird Johnson explain that empty was the Sanskrit root for the word widow. I recall the defiance she articulated against the identity of being emptied as if, with President Johnson dead, she was now bereft of any content. Whatever her response to this label, she had a word to reject or embrace, and there was as much resonance for me in that root as there was in her rejection.

Nevertheless, despite the generations of parents whose fate it is to spend their years shadowed by the memories only of the child or children they have lost, there is no name for us. I feel further punished by this empty space of language.

I have struggled with its creation in English. It must be a soft word, quiet, like our grief, but articulate in its claim. Perhaps a blend of shadow and orphan, maybe a word like sharphan? But in my mind, where the sounds of words matter greatly, that has no resonance and seems the artifice it is.

I have thought as well of words that seem connected to widow and child. Maybe wild. But that is only how I feel, not what I am. I think it cannot just be that there is no word possible that would be full enough for this sorrow, specific enough so that no one need question further, a word sufficiently plain so that my stumbles that follow the question, Do you have children? would be managed better than the ways I clumsily respond. I need a stable word.

So I request that those who think about language and text and words and their sounds to consider this assignment. If I cannot, even one whose profession is exactly that, someone who reads and considers the cultures and meanings and words, who lingers over poetry and prose and knows how to parse a sentence and its meaning, if I cannot do this task because I suspect the grief has overwhelmed, I appeal to someone else to craft a word to name parents who have lost a child.

Please consider this an urgent request. Our numbers grow daily. With drive-bys and carelessness, with genocides, and accidents, illnesses, and suicide, war, and, yes, murder, the ways in which our children die multiply. And since we have found no word to bring those horrors to their conclusion, I petition instead for a word, a name that gathers the grief we represent. Send it in care of the post office, just one word, please, that names a parent who has lost a child. All contributions will be gratefully acknowledged by the family.

GORDON: Karla Holloway is the author of Passed On: African-American Mourning Stories. This is NPR News. 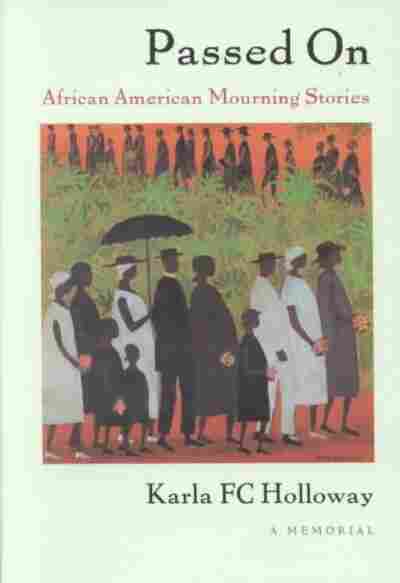