Accessibility links
Connecting the Coasts: A Road Revolution This week marks the 50th anniversary of legislation that created the nation's interstate highway system. It couldn't come at a better time for America -- drivers were growing frustrated by the lack of roads and the congestion in the cities. 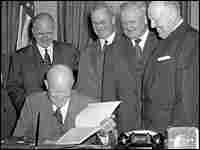 January 1955: Members of an advisory committee present their recommendation for a $101-billion national roads project to President Eisenhower, who became known as the "father of the interstate system." Bettmann/CORBIS hide caption

Fifty years ago, the highway system had a lot of supporters, but it was President Eisenhower who used the bully pulpit of the Oval Office to push Congress to fund the ambitious plan. That's why he is often referred to as the "father of the interstate system."

As a young Army officer, Eisenhower was part of a cross-country truck convoy meant to test the U.S. military's mobility. The convoy took 62 grueling days to get from Washington, D.C. to San Francisco, fording rivers and crawling over mountain passes.

Later, when Eisenhower was in Germany at the end of World War II, he marveled at the efficiency of the defeated nation's modern Autobahn system. He vowed to make a modern highway system a priority of his presidency, and after his landslide re-election bid in 1956 Congress moved to make it a reality.

It couldn't come at a better time for America -- more and more people were buying cars, but were growing frustrated by the lack of roads and the congestion in the cities.

But there was a dark side to the push to build the system, too. Buildings would need to be razed and homes and people displaced to make way for the roads, and more often than not those displaced were poor and black.

By mid-70s the system was largely in place -- 47,000 miles of road, 5,600 bridges and 15,000 interchanges. This year alone, Americans will use that system to drive an estimated three trillion miles.

• The first major "sig-alert" -- a traffic alert system devised by Lloyd "Sig" Sigmon -- was broadcast on Jan. 22, 1956 to alert drivers of a derailed train near Union Station in Los Angeles. Broadcasters requested any available doctors and nurses to respond to the scene -- but too many doctors, nurses and sightseers jammed the roads, making the situation worse.

• One of the most sought-after luxury cars was the Continental Mark II. It weighed 5,190 pounds and cost nearly $10,000. Famous owners included Elvis Presley, Frank Sinatra and the Shah of Iran.

• The first few miles of the interstate highway system were built in rural Kansas -- the state President Eisenhower grew up in and considered his home. He was born in Texas.