Accessibility links
Metropolis, Ill., Basks in Ties to the Man of Steel Superman Returns will bring fresh attention to the fictional city of Metropolis -- and its real counterpart, a small burg in southern Illinois that unabashedly promotes its ties to all things Superman. Tom Weber of member station KWMU reports.

Listen
Metropolis, Ill., Basks in Ties to the Man of Steel 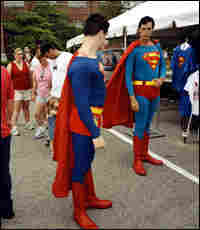 Super Size Up: Christopher Dennis (right), who works fulltime as a Superman impersonator on Hollywood Boulevard, checks out the costume of a rival Superman during last year's annual Superman celebration in Metropolis. Peter Dench/Corbis hide caption 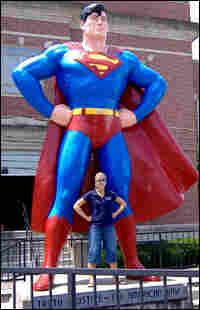 Joanna Jackson, of Chicago, stops to pose for a photo with the Superman statue in downtown Metropolis. Tom Weber for NPR hide caption

Joanna and Gloria Jackson, of Chicago, snap photos by the Superman statue in downtown Metropolis. The Jacksons were on their way to Florida. 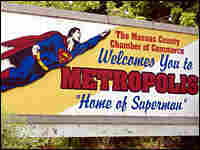 This sign, near the Illinois-Kentucky border at the Ohio River, beckons drivers on Interstate 24 to visit the giant Superman statue in Metropolis. Tom Weber for NPR hide caption 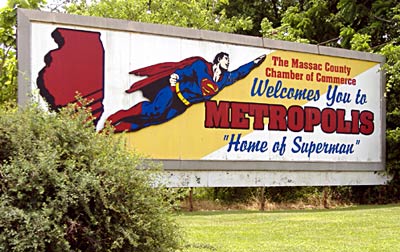 This sign, near the Illinois-Kentucky border at the Ohio River, beckons drivers on Interstate 24 to visit the giant Superman statue in Metropolis. 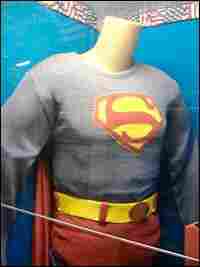 One of the original costumes George Reeves used in the 1950s Superman television series is displayed at the Super Museum in Metropolis. The costume is valued at about $250,000. Tom Weber for NPR hide caption

Superman Returns will bring fresh attention to the fictional city of Metropolis -- and its real counterpart, a small burg in southern Illinois.

In the comics and movies, Metropolis is a city that never sleeps. But as Tom Weber of member station KWMU reports, the Ohio River town of the same name is really more like Smallville, the drowsy Kansas town where Superman grew up.

As drivers on I-24 approach the Illinois-Kentucky border at the river, a sign beckons them to exit and visit the giant Superman statue. Gloria Jackson and her daughter, Joanna, of Chicago, missed the sign, but were lured to Metropolis nonetheless.

"We were driving to Florida and we needed a rest stop," Gloria Jackson says. "We saw the big water tower that said 'Home of Superman,' and I said, 'We're taking a picture with Superman!'"

Metropolis unabashedly promotes its ties to Superman in all things, big and small.

The town square near the courthouse features an enormous bronze statue of the Man of Steel. A smaller wood cutout nearby allows a visitor to pose as Superman for a photo. Then there's the phone booth. It has no phone. It's just there in case Clark Kent shows up and needs a changing room.

At the Super Museum, visitors are serenaded non-stop with Superman songs and themes. If you've ever gone looking for Superman silly string and couldn't find it, search no more. The gift shop also has shirts, hats and -- yes -- rocks of kryptonite. And for $3 you can tour Jim Hambrick's personal collection of Superman paraphernalia, which all started with a lunchbox in 1959.

"My mother gave me that when I was 5 years old," Hambrick says. "As birthdays and Christmas would progress, I'd get stuff and keep the boxes, and I just went crazy from there."

Hambrick moved to Metropolis 10 years ago from Hollywood so that he could give his traveling Superman Museum a permanent home.

He helps book big-name guests for the annual Superman Celebration, which drew a record 50,000-plus visitors this year. Among them was Stephan Bender, who plays the teenaged Clark Kent in the new movie.

And if that's not enough to connect the town to Superman, in the 1970s the local paper here re-named itself The Planet, after the comic book daily that employed mild-mannered newspaper reporter Clark Kent, Lois Lane and Jimmy Olsen.

Clyde Wills, editor of The Planet, has seen Superman movies and TV shows come and go. He says the drill is always the same.

"We'll have more that are on their way from St. Louis to Florida, or whatever, and they'll say, 'Hey! Let's stop in Metropolis and see the statue or buy a souvenir," Wills says.

The town was named long before Superman's creators were even born. It's the only Metropolis in the United States, and its heart is Superman. When the comic book killed him off in the 1990s, residents held a funeral. It has a contract with DC Comics as the official home of the superhero.

In fact, the only thing Metropolis seemingly can't offer in the way of Superman is the film itself: The town's movie house closed nearly 30 years ago.