Accessibility links
The Sound of Pure Britpop, Texas-Style The Texas band Dynah draws on influences ranging from Mick Ronson and Johnny Marr to Radiohead. Wake, its sophomore album, represents a potent distillation of those influences — awash in atmospheric soul, with zero filler.

The Sound of Pure Britpop, Texas-Style

The Sound of Pure Britpop, Texas-Style

For the past few years, Dynah has been a little-known staple of Texas tight-knit circle of pop-friendly clubs, but the band recently got more methodical about its career, retreating to the studio while seemingly reflecting on everyone from Mick Ronson and Johnny Marr to Radiohead. Wake, Dynahs sophomore album, represents a potent distillation of its influences -- awash in atmospheric soul, with zero filler. 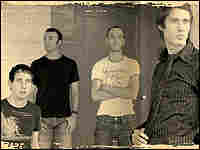 Saudi-born singer Rion Bsales is a classically trained pianist and a relative newcomer to Western pop culture, arriving in the U.S. only 10 years ago. Dynah's bassist is from Stratford-upon-Avon, its guitarist is from Baltimore, and its drummer is from Austin, but the group's sound is pure Britpop: impeccably polished and vaguely reminiscent of the bands that dominated college radio 10 or 15 years ago.

Like much of Wake, "How To" showcases simple hooks more than exceptional instrumental technique or especially insightful lyrics, but anyone who's tried to crank this stuff out for a living knows that writing a great pop song is no mean feat. And "How To" is a great pop song.