Accessibility links
Gates Foundation's Work Targets Global Health Thanks to the pledge of $31 billion in stock from investment guru Warren Buffett, the Bill and Melinda Gates Foundation will soon have far more resources to use in its work to fight diseases around the world. The foundation, which gave out about $1.35 billion in 2005, has had its greatest successes in global health.

Thanks to the pledge of $31 billion in stock from investment guru Warren Buffett, the Bill and Melinda Gates Foundation will soon have far more resources to use in its work to fight diseases around the world. The foundation, which gave out about $1.35 billion in 2005, has had its greatest successes in global health; its recent efforts have included fighting malaria in Africa.

The Gates Foundation also works to improve schools and technology available to needy students in the United States. Michele Norris talks with Tom Paulson, global health reporter for the Seattle Post Intelligencer, about how the foundation will spend the money. 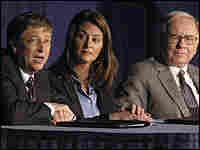 When a Public Health Giant Doubles in Size

The sheer size of the new Bill and Melinda Gates Foundation grants will no doubt influence how governments and other foundations choose to spend their public-health dollars, says Gerald Keusch, associate dean for global health at Boston University's School of Public Health.

Here, Keusch talks about how Buffett's gift to Gates may affect other public-health players:

Q: Can it be a bad thing to have so much money concentrated in one foundation?

When you're the 800-pound gorilla, you have a lot of power and impact and potential. It also creates some ambivalence on the part of the other players.

Q: What sorts of problems can crop up?

I worry about the effect that Gates' money has on the investment of others. Say you are the government of Uganda, and you've decided you're going to invest a certain amount of dollars in improving birth outcomes. And now Gates says, we're going to put X million dollars into your country and suddenly the country's own monetary commitment disappears. Then five or 10 years down the road, Gates says, "That's enough," and pulls out. There's no continuity of support. I hope the foundation will now look more at long-term sustainability.

Where would you like to see Gates put this new influx of money?

One hope would be that with this huge amount of additional money, they not only sustain the current kinds of investments but can now pick up on the infrastructure, training and the capacity of developing countries to deliver health care. Those are areas where Gates has not made any significant investment.

Should Warren Buffett have created a new foundation?

No, I think Buffett's philosophy is right on target. It's not a good idea to set up another foundation. The Gates Foundation has made a huge positive contribution, and Buffett's gift is a recognition of the priority they've made of global health in comparison to the other foundations, which have many priority areas.

They have a great opportunity now to get involved in an instructive, creative and complementary manner with their counterparts — other foundations, the governments of developing countries, as well as governments with serious funds for health programs, such as United States and Britain.

The Bill and Melinda Gates Foundation was already one of the top players on the global public-health scene; its annual donations -- $1.36 billion in 2005 -- dwarf those of other private charitable organizations. Now, with its spending set to double thanks to a gift from Warren Buffett, the foundation wields a fortune that holds the potential for even wider-scale change.

The foundation has invested in many areas of public health, from providing childhood immunizations to agricultural research in developing countries. One of the foundation's major priorities is HIV/AIDS prevention and treatment, with more than $350 million given in grants.

Thomas Quinn, who is director of the Johns Hopkins Center for Global Health and has followed the foundation's AIDS work, spoke with NPR about Gates' role in the global effort to stop the disease. The foundation's attractions are not only its deep coffers, says Quinn, but its innovative and adventurous approach to research:

The Gates Foundation right now is the largest philanthropic organization supporting global health research. For example, UNAIDS carries out surveillance of programs and makes global recommendations in prevention and treatment, but it doesn't fund major initiatives, like those involving research activities.

So right now, for instance, the Gates Foundation is supporting vaccine research for HIV and childhood diseases. WHO and UNAIDS are awaiting the results of those vaccine trials, and if they show protection, WHO or UNAIDS would then make recommendations to countries to implement these types of interventions. And the Global Fund to Fight AIDS, Tuberculosis and Malaria, provides funding for treatment and care -- it doesn't fund research.

All of these groups actually work well together, because they target different areas.

As a private group, does the Gates Foundation have more freedom in choosing the types of research it wants to fund?

Yes, the Gates Foundation is trying to fill in the gaps. They're really a transition between the National Institutes of Health and, ultimately, the Global Fund for AIDS, TB and Malaria. The foundation can fund really innovative, thought-provoking studies that perhaps a peer-review group like the NIH might avoid because they're high risk.

We have a trial right now in Uganda. NIH is funding one part of it: the circumcision of HIV-negative people to see if that prevents HIV acquisition. Gates is funding the other part: the circumcision of HIV-positive people to see if that prevents transmission. Both parts of the trial are in the same district and have the same investigators. But NIH felt comfortable funding one part, and Gates felt comfortable funding the other part -- that's a little bit riskier, to circumcise people who are HIV-positive.

Are there other differences between an NIH-funded trial and a Gates-funded research?

If you go to the NIH, you might be lucky to get a couple of million dollars to do a research project. You can go to Gates and get $40 million. They think on a bigger scale because they have the funds.

NIH can't match the scale of the Gates Foundation grants, because it has a mandate to fund research in all diseases, most of which have a U.S. or domestic base. They have to cover everything with a budget that is currently capped. Gates has chosen to focus on the big three -- AIDS, TB and malaria -- and childhood vaccines, and applications of this research to developing countries.

What is the foundation's reputation in the developing countries they work with?

It's superb, they're a godsend to many of these countries. They try and make a difference. Prior to the Gates Foundation, there was a real void. There were some foundations, but they didn't have the richness or financial depth. Ford, Carnegie and Rockefeller, they have also been committed to these health inequalities. But the Gates Foundation spent $1.3 billion last year. That's phenomenal, and that's on an annual basis, that makes a big difference.

Where has the foundation made the most difference so far?

I think they've made a huge difference in immunization programs. They have funded vaccine programs immensely, making them available where they weren't before and saving millions of lives. And from my perspective, that's one of their greatest achievements.

Gates is preparing to devote his work full-time to the foundation. Is that a good thing?

He is extremely bright and loves making a difference in global health. The good news is that he's traveled widely, he knows people who can make a difference, he knows how to run a big organization, and we can all agree he's done pretty well with that. We'll have to see how it plays out, but I think having Gates and his wife, Melinda, more involved on a day-to-day basis will only be good for the entire field of global health.

Editor's Note: Both Quinn and Keusch have been involved in Gates Foundation-funded projects. The Gates Foundation also provides support for coverage of global public health on NPR.