Accessibility links
'Disobedient Son' Leads Mexico's Conservatives In Mexico, millions will go to the polls on Sunday to elect a new president. In the second of our series on Mexico's presidential contenders, we profile conservative candidate Felipe Calderon. The latest numbers show he is slightly behind his left-leaning opponent.

In Mexico, millions will go to the polls on Sunday to elect a new president. In the second of our series on Mexico's presidential contenders, we profile conservative candidate Felipe Calderon. The latest numbers show he is slightly behind his left-leaning opponent.

Mexicans vote for a new president on Sunday. Polls indicate the candidate from the Left has a slight lead over the one from the Right. NPR's Lourdes Garcia-Navarro has the second in our series of profiles of the presidential contenders. She went to a huge weekend rally in support of conservative Felipe Calderon.

For a man who loves soccer, and has closely allied himself with the fortunes of the national team, Mexico's failure to get into the final round of the World Cup might seem a bad omen for a presidential hopeful who's in a tight race. But if Felipe Calderon was feeling worried, he wasn't showing it when he appeared before an estimated 100,000 people on Sunday.

Unidentified women: Felipe Calderon has something of a reputation as a dull technocrat who lacks charisma. It's obviously something his campaign is trying to get rid of on this, the final day of his official campaign tour.

They've rented out a second stadium, which is where soccer matches are held in the capital. It's packed to the rafters, and the party-faithful are giving him a rock star reception.

GARCIA-NAVARRO: He's wearing a blue, formal blazer as he takes to the stage with his wife and three children. Calderon's speech is scripted. This is a man who likes to measure his words: a vast contrast with main rival from the left, Andrés Manuel López Obrador, who loves to work the crowd.

The fight between Lopez Obrador and Calderon has been a bitter one. The Calderon team has used attack ads calling his leftist rival a danger to Mexico. On this day, Calderon sounds the theme again.

GARCIA-NAVARRO: Calderon's platform revolves around free market policies, a tough stand on crime, and scholarships for education. He's the favorite of the business community, and his critics say he's the candidate of the rich.

Lower middle class voters, though, are seen as very important in this election. On this final day, Calderon addresses them directly.

Mr. CALDERON: (Through translator) I am a man who dreams of an equal Mexico, that offers everyone opportunities for healthcare, for education, for housing. I, like you, dream of a generous Mexico, that supports its neediest family, so that they can live with dignity and leave poverty behind.

GARCIA-NAVARRO: Felipe de Jesus Calderon was born on October 18th, 1962, in Morelia. His father was a founder of the National Action Party, or PAN, that came to power in 2000 with President Vicente Fox, breaking 71 years of one-party rule. Calderon trained as a lawyer in Mexico, and then went on to study public policy at Harvard. He became Energy Secretary, under Fox.

He had little name recognition when he sought the PAN nomination. Fox cannot run for reelection under Mexican law, and Calderon was not his choice as a successor. Calderon has tried to capitalize on that, calling himself the disobedient son, in order to distance himself from Fox, who some here view as a disappointment.

GARCIA-NAVARRO: Calderon supporters, carrying banners and balloons, were bussed in from all over the country to attend the Azteca Stadium event. For many, a vote for Calderon is a vote against the leftist candidate, Lopez Obrador, whom people in Mexico either love or hate.

Pedro Mehia(ph) is a shopkeeper who's come in from Hidalgo.

Mr. PEDRO MEHIA (Shopkeeper, Mexico): (Through translator) Calderon is going to give us the economic stability that this country needs, and the social peace that it needs. I'm afraid of Lopez Obrador, because he would return us to a period of social conflict here.

(Soundbite of Calderon supporter chanting at the rally)

GARCIA-NAVARRO: Others, though, see another opportunity for something new. Also outside the stadium is Jose Luis Rosas(ph), a 39-year-old street seller.

Mr. JOSE LUIS ROSAS (Street Seller, Mexico): (Through translator) We had 70 years of one party. Then we voted for Fox of the PAN and we saw that they were only helping big business and the rich. So now we have to vote for the left, and Lopez Obrador, because I think we need another change.

GARCIA-NAVARRO: It's an ironic legacy of the PAN success in making Mexico a real multi-party democracy.

STAMBERG: Profiles of the presidential candidates plus key issues in the Mexican election are at npr.org.

You're listening to MORNING EDITION, from NPR News.

Felipe Calderon, the Mexican presidential candidate of the National Action Party (PAN), delivers a speech during a campaign rally in Acapulco, Mexico. 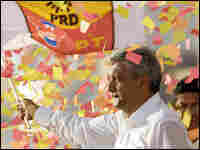 The two leading candidates vying for the presidency come from opposite ends of the political spectrum, and Mexicans must choose which economic model they want the country to follow. The leftist Lopez Obrador wants to spend big to create jobs. The candidate further to the right, Calderon, wants to follow the free-market policies put in place by outgoing President Vicente Fox.

Until Fox's election in 2000, Mexico had been dominated by one political party -- the Institutional Revolutionary Party, or PRI. For 71 years, PRI ruled the country through a system of patronage in which sitting presidents chose their successors. That stranglehold on the nation was broken when Fox, representing the conservative National Action Party, won the presidency. As Fox nears the end of his term, his approval ratings remain high, though many have been disappointed by his lackluster presidency.

A vicious negative campaign has exacerbated tensions ahead of next Sunday's vote. A win by Lopez Obrador would continue Latin America's shift to the left. Below, a look at the candidates and the issues involved:

Lopez Obrador was born in the state of Tabasco on Nov. 13, 1953. He was the first son of shopkeeper parents and the eldest of what would be seven siblings. He became an Indian rights activist and was a founder of the leftist Party of the Democratic Revolution (the acronym for which is PRD in Spanish). He's now running on the party's ticket.

Lopez Obrador emerged as a national force in politics when he was elected mayor of Mexico City in 2000. His policies focused mainly on lower-income residents of the capital and led to widespread popular support. Many residents came out to support him when he faced impeachment proceedings in an obscure land-deal case.

Lopez Obrador survived the impeachment hearings. But the case was widely viewed as a political plot aimed at preventing him from running for president.

Lopez Obrador's tenure as mayor was again tainted when several high-profile officials within his administration were filmed receiving bribes. Lopez Obrador was not implicated in the case.

His economic proposals focus on a large campaign of public spending to boost the economy. He emphasizes creating jobs for the 40 million Mexicans who live in poverty. He wants a new overland shipping route that will rival the Panama Canal, a high-speed railway connecting cities, and the planting of one million acres of furniture-grade forest to provide jobs. He's also promising subsidies that will lower the cost of fuel and electricity.

Felipe Calderon -- PAN: Felipe de Jesus Calderon was born on Oct. 18, 1962, in Morelia. He is PAN royalty. His father was a founder and influential member of PAN -- the Spanish acronym for the National Action Party. Calderon trained as a lawyer in Mexico and then went on to study public policy at Harvard. He became energy secretary under President Vicente Fox. He had little name recognition when he sought the PAN nomination, and he was not Fox's choice. He is a devout Catholic and is considered a solid technocrat, somewhat lacking in charisma.

Calderon's big strength, however, is his "clean hands" image. He has promised to stamp out corruption and create a transparent government. His economic policies are focused on a free-market model that seeks to continue Fox's path of economic stability through trade and low inflation. Not surprisingly, he is the favorite of Mexico's business community.

Early in the game, Calderon was in third place in the polls, but a campaign of attack ads that sought to portray his rival Lopez Obrador as a "danger to Mexico" resonated among the middle class, and the race between the two has tightened.

Lopez Obrador struck back in the last debate, accusing Calderon of nepotism in dealings with his brother-in-law. At one point, Calderon had pulled ahead of Lopez Obrador in the polls, but he is once again trailing the former mayor of Mexico City.

Roberto Madrazo -- PRI: Roberto Madrazo was born July 30, 1952, in Villahermosa, Tabasco. His family history is as tumultuous as that of the PRI itself. His parents died in a plane crash when he was 17, and some think the crash was arranged to kill Madrazo's father, a PRI president intent on reforming the party.

Madrazo studied law and earned a master's at the University of California. He has served as governor of his home state of Tabasco, which is also the home state of Lopez Obrador. The two are old rivals who ran against each other in the gubernatorial election.

Madrazo followed in his father's footsteps and became the PRI president in 2002. He is credited with re-organizing the party after the devastating 2000 election, which ended 71 years of one-party rule.

Critics say Madrazo is an old-style party boss. He's been accused of corruption and tax evasion and is running a distant third in the polls. Some key PRI leaders have said they will not support him in the election.

Madrazo is trying to occupy the middle ground by advocating social programs that focus on regional development and education. And while he may not win the election, the PRI is expected to do well in Congress. However, his defeat will probably mean a new shakeup for the party as it tries to re-brand itself.

Mexicans are interested in two things: jobs and security.

The Economy: Under the leadership of Vicente Fox, inflation has been low and the peso has been stable, but jobs are still scarce. Analysts say 1 million new jobs need to be created each year in Mexico in order to provide employment to those who are entering the work force. That hasn't happened, and economic growth has been lackluster. Nearly 50 percent of Mexicans live on less than $4 a day, yet the third-richest man in the world, Carlos Slim, is Mexican.

Crime: Drug crime. Kidnappings. Assassinations. Mexico is one of the most violent countries in the world. A recent spate of beheadings of police officers has given drug violence a new twist. Mexico is the main corridor for drugs entering the United States, and gangs are fighting for control of the trade route from Cancun to Acapulco to the border. Police are often implicated in crimes, and a tiny fraction of criminals are prosecuted.