Accessibility links
'Superman Returns' with Strong Action, Weak Story Morning Edition and Los Angeles Times film critic Kenneth Turan gives his take on the new Superman movie, Superman Returns. Turan likes the action, but he says the characters and plot are not made of steel.

Morning Edition and Los Angeles Times film critic Kenneth Turan gives his take on the new Superman movie, Superman Returns. Turan likes the action, but he says the characters and plot are not made of steel. 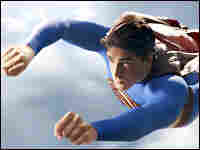 It's a bird, it's a plane, it's a sequel. Superman Returns swoops into theaters tomorrow. Los Angeles Times and MORNING EDITION film critic Kenneth Turan says the latest adventure of the Man of Steel is more Clark Kent than caped.

Superman Returns is a hummingbird in reverse. The tiny bird shouldn't be able to fly but does. The massive movie on the other hand should soar, but barely gets off the ground. Superman Returns is the first movie about the Man of Steel in 17 years, and it wants to make all the right moves. Director Bryan Singer is the ideal choice to direct. He's felt a connection to the character since childhood and he has already made X-Men and X-2, two of the best and most successful of the modern superhero movies.

Equally shrewd was picking 6'3” Iowa raised Brandon Routh to play both Superman and awkward alter ego Clark Kent, the drudge of The Daily Planet newsroom. Routh brings the right not of appealing earnestness to a man who stands for what the film calls truth, justice, all that stuff. It's probably best not to ask what happened to the American way.

Superman Returns is at its best when its protagonist gracefully flies over, around and through metropolis. Also, as might be expected, the film's $200 million-plus budget has bought some nifty special effects of the able to leap tall buildings at a single bound variety.

Unidentified Man #1: There is some kind of unidentified bogie coming in from the north.

Unidentified Man #1: And it's coming fast.

TURAN: There are far too many minutes, however, in this two hour and forty minute epic when the big guy is not in the air and this sprawling, overly long film doesn't quite know what to do with itself when there is no action to attend to. Plus, a rolling series of miscalculations about what it is doing cripple all its best intentions.

The biggest mistake was giving Kevin Spacey the role of Superman's arch nemesis Rex Luthor. Unable to decide if Luther is an amusing character or one we should take seriously, Spacey's half jokey Luthor is more of a smug irritant than a menace for most of the film.

Mr. KEVIN SPACEY (Actor): (As Rex Luthor) Do you know the story of Prometheus? No, of course you don't. Prometheus was a god who stole the power of fire from the other gods and gave control of it to mortals. In essence, he gave us technology; he gave us power.

Ms. POSEY: (As Kitty Kowalski) Sounds great, Lex, but you're not a god.

TURAN: Also a problem is the choice of Kate Bosworth as love interest Lois Lane. Bosworth is a game actress but nothing more, and even superhero movies need depth if they are to make emotional connections.

Star Routh's presence and the joys of flight keep Superman Returns alive, but all those missteps dog its heels, holding it back like little touches of kryptonite in the night.

STAMBERG: Kenneth Turan is film critic for the Los Angeles Times and for MORNING EDITION.