Accessibility links
Medical Lesson: Learning to Relate to Patients Medical schools and residency programs are under increasing pressure to turn out doctors who are good communicators and compassionate in their interactions with patients. It's a huge challenge, but one program is addressing the issue with monthly lunch for first-year doctors. 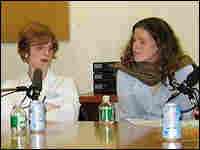 Medical schools and residency programs are under pressure to train doctors who are good communicators and compassionate with patients. It's a huge challenge, as young doctors are overworked and often overwhelmed by the realities of the health care system.

One program that is addressing these issues is a monthly lunch for first-year medical residents at New York-Presbyterian Hospital. Dr. Barron Lerner, an associate professor of medicine at Columbia University, runs the program. He wants to help the residents think about the doctor-patient relationship -- and ways of humanizing the hospital experience.

The lunch series was started by two doctors at New York-Presbyterian who had cancer. They realized their experience as patients would be a valuable teaching tool.

There are perennial topics that come up in these lunches: breaking bad news, dealing with difficult patients, medical mistakes.

Dr. Jonathan Newman, one of the young doctors, says he feels troubled that he's become a party to what can be a dehumanizing process in the hospital. "You watch people get stripped of their dignity," he says. One of the things that makes it tolerable, he says, is that there are "moments of care."

For Newman, one of those moments came when he took a leukemia patient out to the park in her wheelchair -- to talk about anything but her illness and to cross, briefly, the line between doctor and friend.

Lerner, the program director, hopes the discussions he leads may help these young doctors take those steps outside and -- in a medical world whose economy demands a fast pace -- help them remember how to listen.

About a dozen U.S. medical schools are pushing communication skills to the forefront of medical training. It's estimated about 75 percent of all med schools will gradually make the same move. Thomas Brummett/Corbis hide caption

Starting next fall, all graduating medical students in the United States will have to pass a new exam in order to become licensed to practice medicine. More than a decade in the making, the new test measures clinical skills. But as Madge Kaplan of member station WGBH in Boston reports, it also attempts to gauge how well doctors communicate with patients.

Many first-year medical students are now required to take courses on what is commonly called bedside manner. Tufts University School of Medicine in Boston is one of a dozen schools pushing the new training. It's estimated that 75 percent of all U.S. med schools will gradually follow the lead.

Tufts professor Dr. Jody Schindelheim teaches a course called Interviewing and the Doctor/Patient Relationship. Hear an excerpt from his lecture on interviewing a hospital patient for the first time.