Accessibility links
Few Rules Protect Young Foreign Students in U.S. A cultural exchange program that left some foreign students marooned in a hotel for weeks and sent another student home for complaining has lost its State Department license. But it's still bringing foreign students over to the United States under a system that critics say is ripe for abuse. 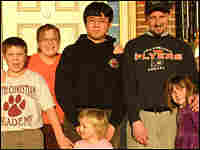 Jason Ryu, a Korean exchange student, finally found a welcoming home with the Myers family of Quakertown, Pa. Four months after he got there, the USA program kicked him out of the country. Courtesy Melissa Myers hide caption 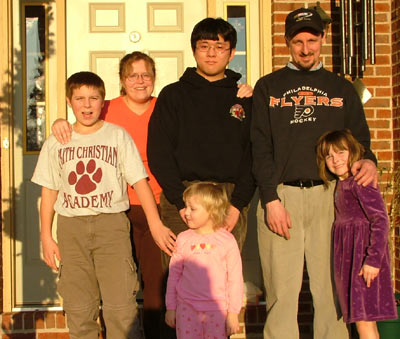 Jason Ryu, a Korean exchange student, finally found a welcoming home with the Myers family of Quakertown, Pa. Four months after he got there, the USA program kicked him out of the country.

Most foreign students who study in the United States enter through one of two visa programs: the J-1 or the F-1. Below, an overview of each type of visa and its requirements and protections:

The J-1 cultural-exchange program originated during the Cold War, the brainchild of Sen. J. William Fulbright. The Arkansas educator-turned-politican thought it would promote peace to have educational and cultural exchanges between the people of the United States and the people of other countries.

Jason Ryu and Jessica Cho were among the roughly 30,000 foreign high-school students who enter the United States each year on a J-1 cultural-exchange program.

Those programs are licensed and governed by the U.S. State Department. About 130 sponsors are licensed to run them. Until this spring, USA United Students Association was one of those sponsors.

Stanley Colvin directs the J-1 cultural-exchange programs. He says the State Department receives about 100 complaints a year about foreign-exchange programs at the high-school level. Most don't require government intervention.

Under the J-1 program, high school students are allowed to stay in the country for one academic year. Their sponsors are required to follow rules designed to protect national security and the safety and welfare of the youngest visitors.

Those rules include screening and background checks of host families, to ensure young students aren't placed with criminals or sex offenders. Programs must also secure enrollment in accredited public schools before the student leaves home.

The F-1 visa program is strictly for study — not cultural exchange. F-1 visas are best known as the visas many foreigners use to study in U.S. colleges and universities.

What is less known is that high-school students may also use F-1 visas. This year, 19,500 students were in the United States on F-1 visas. The Department of Homeland Security regulates the visas.

The rules for F-1 visas are designed to ensure students' families have the money and resources to support the student while they are in America. Unlike the J-1 program, the F-1 visas don't have rules to protect young students who are here on their own.

High-school students who are in the U-S on F-1 visas may stay for one year if they are enrolled in public school. But if they are attending private school, they may stay as long as they remain enrolled in that school.

High-school students on F-1 visas who graduate may stay in the United States if they enroll in college. — Libby Lewis

An 'Embarrassment' to the State Department

In April, the State Department informed USA United Students Association Inc. that it was asked to give up its license to bring over cultural-exchange students because of acts that brought the program "notoriety or disrepute."

Every year, tens of thousands of teenagers from around the globe come to the United States to live and learn. Most go home with positive memories of America.

Such cases prompted the U.S. State Department to strip a private program of its license to bring cultural-exchange students over to America. That program was meant to help improve America's image abroad. But USA United Students Association Inc. plans to use other means to keep bringing foreign students into the country regardless.

Dallas-based USA is one of dozens of nonprofit groups working with recruiters overseas to find homes and schools in the United States for foreign students, whose families can pay thousands of dollars for the privilege. The Ryus spent $20,000 for their son's stay in the United States.

Yet when Jason, then 16, arrived in the United States last August, he found he didn't have a host family. The agency found him one -- 10 days later. According to Stanley Colvin, a government official who oversees the cultural-exchange programs, that was a direct violation of State Department policy.

"The first rule [is] you must have a host-family placement before the student arrives," Colvin says.

Jessica Cho says she and dozens of students spent weeks in a Dallas hotel last year before USA found them host families. In her case, it was 31 days. At 16, she says, she was the oldest of the group. One girl was 14.

"We had no hope," Cho says. "Every day, every morning, we expected a call" about a host family.

Cho eventually was placed in a host home. So was Ryu -- not in Maine, as he'd originally been told, but in Allentown, Pa.

Ryu says his host family didn't cook or clean; the house was dirty and flea-ridden. He was often left alone.

On top of that, Ryu -- who says he was told he would attend public school -- was instead placed in a private, unaccredited Christian school. USA threatened to return Ryu to Korea if his parents didn't pay the tuition. That was another violation of State Department policy, Colvin says.

USA told Ryu it was his fault he wasn't fitting in with his host family. But after about a month, the agency did move him; he wound up at the house of Melissa Myers in Quakertown, Pa. There, Ryu says he finally felt welcome.

"The kids were friendly," Ryu says. "It felt like family, a peaceful and happy atmosphere."

He was happy for four months. Then, USA learned that Myers had filed a complaint with the State Department about how the agency had treated Jason Ryu and other students. Soon after, Jason was forced to leave the country.

Colvin says the State Department receives about 100 complaints each year from the nearly 30,000 high-school students who come to the United States as exchange students annually. Most complaints don't require the government to step in. This one did.

A Program of 'Notoriety'

"I felt like a criminal," Ryu recalls. "I felt like I was getting arrested. They kept on telling me to go home."

A government review, dated April 6 and addressed to the company's executive director, concluded that USA's actions had brought the State Department's exchange program "into notoriety or disrepute." It asked USA to withdraw its license to spare the government "further embarrassment."

USA complied. Yet despite that loss of license, USA still calls itself a student-exchange program. But it's now relying on another visa program to bring in foreign students -- one that offers no State Department protections. They're called F1 visas, and they are regulated by the Department of Homeland Security.

F1 visas were once the province of wealthy high-school students attending boarding schools or living with relatives. But the documents are now popular with middle-class families from emerging economies who send their children to study in America, seeking a competitive edge.

A growing number of schools want to tap that market, which might mean more business for groups such as USA.

Chris Bentley, a spokesman for the Department of Homeland Security, says students who come to the States on an F1 visa are required to prove they can support themselves. Beyond that, he says, it's up to the parents back home to make sure their child is all right.

Bentley says there's no evidence USA has broken any of Homeland Security's rules. But Lori Saldana, a California lawmaker from San Diego, says those rules aren't good enough. She's sponsored a bill that would force all foreign-student programs to run detailed background checks on host families in her state.

"I've heard stories of these students being subjected to what is almost indentured servitude," Saldana says. "And they're told that's just the way it is in the U.S. They may not have the cultural awareness to challenge being used as a housekeeper or nanny. We want to make sure none of those abuses are taking place."

"There are kids coming here, and they pretty much don't have a voice," Myers says. "Nobody listens to what they have to say." And to her, that's not what America is about.