Accessibility links
Downsizing Drama with Delicacy and Grace Grant-Lee Phillips' nineteeneighties would seem to be an odd creative detour — the set finds him covering '80s alt-rock classics by the likes of R.E.M., the Cure and the Pixies — but it's surprising how smoothly its tributes fit into his homespun, heartfelt catalog.

Downsizing Drama with Delicacy and Grace

Downsizing Drama with Delicacy and Grace

Last Night I Dreamt That Somebody Loved Me

As leader of the '90s roots-pop group Grant Lee Buffalo, Grant-Lee Phillips built a reputation as a modest, approachable sleeper: Stardom has eluded him as both a bandleader and a solo act, but a devoted cult following has followed him down some odd side roads along the way. Phillips' fourth solo album, nineteeneighties, would seem to be one of those creative detours -- the set finds him covering '80s alt-rock classics by the likes of R.E.M., the Cure and the Pixies -- but it's surprising how smoothly these tributes fit into his homespun, heartfelt catalog. 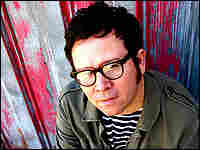 Grant-Lee Phillips puts his familiar stamp on a batch of great songs from the '80s. hide caption

It helps that Phillips works with top-notch source material, and that nineteeneighties functions as a labor of love, which goes a long way toward explaining the extent to which he puts his personal stamp on this batch of familiar greats. His work sounds particularly striking on a reworking of The Smiths' "Last Night I Dreamt That Somebody Loved Me," as he scales back the original's outsized, Morrissey-driven melodrama to great effect.

Built around a gently plucked acoustic guitar, Phillips' falsetto and a slow-moving blur of synths, the track takes its time accumulating its emotional impact, closing nineteeneighties with a moment of delicacy and grace. It's not a star-making performance, exactly. But Phillips was born to be an under-appreciated gem, not a star, and this sweetly unassuming cover serves as a natural manifestation of that destiny.