Accessibility links
Doggy Day Care Unleashed Day care isn't just for kids anymore. In recent years, more than 1,500 day-care centers for dogs have opened around the country. Some dog lovers confess to spending $6,000 to $7,000 a year on the service. How's that for puppy love? 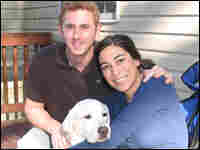 Day care isn't just for kids anymore. In recent years, more than 1,500 day-care centers for dogs have opened around the country. Amenities range from limo pick up to Web cams. Some dog lovers confess to spending $6,000 to $7,000 a year on the service -- as much as some people pay for child care.

Genny Quarfoot and her husband, Matt, don't really have time to care for a dog. Genny is studying for the bar. Matt is a software salesman who is often on the road.

But the couple considers Roxy, their yellow lab, their baby. So instead of leaving her cooped up at home for hours, they take her to Ana's Ark -- a doggy day care near their home outside Washington, D.C.

As they approach what used to be a warehouse in a suburban industrial park, Roxy wags her tail. The doggy day-care room is about the size of an elementary school cafeteria. When Roxy arrives, several dozen dogs surround her as if they're taking part in a rugby scrum. They climb about on children's play equipment, including a well-chewed Little Tykes sliding board. Several staff members toss balls and patrol the room with paper towels, cleaning up accidents on the tile floor.

Anneliese Johnson, who runs Ana's Ark, keeps an eye out for aggressive behavior.

"He's walked into the room and decided he's going to be top dog," says Johnson, eyeing George the poodle. For George, that means a bit of discipline -- 15 minutes in solitary.

The center also has eight Web cams, so anxious owners can monitor their dogs from work.

Back at home, Genny Quarfoot takes a study break to watch Roxy on her laptop.

"I think it's fun to watch, because you want to see if your dog is having a good time and if you're getting your money's worth for the day," says Quarfoot. "I actually would do that in the beginning because when you first join, you're sort of nervous, and a lot of people aren't familiar with the service. So it's a comfort for me to see someone in the room all the time, like they promised."

Like some elite schools, Ana's Ark requires a dog "interview" to make sure the animal isn't too aggressive and plays well with others.

"I was like, don't blow it. I was really nervous," recalls Quarfoot. "I brought her there. I didn't know what to expect, but they brought out two different dogs, and she sort of smelled them and they smelled her. And she did fine, she wasn't timid at all."

Quarfoot says some of her friends think she is crazy to watch Roxy on a Web cam. And she knows that many people think spending thousands of dollars on day care for a dog is excessive. But she says that knowing Roxy is having a fun and active day gives her peace of mind.

"The reason I get made fun of is because it seems like a lot of pampering for a dog," says Quarfoot. "But I was raised in a family where the dog was part of the family -- it was never a dog. So, yeah, we spoil her. Why not? I could understand that if you were budgeting, that would be the first thing to go, the day care. But if you do have the money, it's a great, great outlet."

Johnson started Ana's Ark four years ago. She charges $30 a day and typically cares for more than 50 dogs. Her clients tend to be young couples like the Quarfoots or empty nesters who can afford to dote on an animal.

Johnson says changes in society created her market. Back in the '70s, one person stayed at home and could take care of the dog. These days, both "parents" work -- sometimes 10-hour days.

"Doggy day care has been able to give them what they want," says Johnson, "which is the companionship of a dog without needing to put in all the time."

It's after 6 p.m. when Matt Quarfoot arrives at Ana's Ark to pick up Roxy. He's looking forward to a quiet night with Genny and a worn-out Roxy.

A happy Roxy greets him with a lick to the face.

Matt heads home in his car with Roxy resting her head on his hand. Soon, she drops off to sleep and begins to snore.