Accessibility links
For Albright and Rice, Josef Korbel Is Tie that Binds Josef Korbel educated two secretaries of state: his daughter, Madeleine Albright, and, on the opposite end of the political spectrum, his star pupil at the University of Denver, Condoleezza Rice. The two women discuss the legacy of their shared teacher.

Listen
For Albright and Rice, Josef Korbel Is Tie that Binds 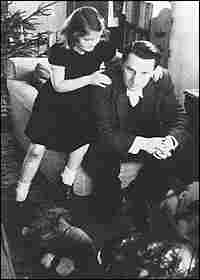 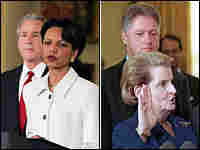 In 1997, Josef Korbel's daughter Madeleine Albright (right) became the first woman to serve as secretary of state. His star pupil at the University of Denver, Condoleezza Rice, became the second, in 2005. AFP/Getty Images hide caption

Josef Korbel may be one of the most influential Americans you've never heard of. He died in 1977, but his legacy lives on in his two most famous students: his daughter, Madeleine Albright, and his star pupil at the University of Denver, Condoleezza Rice.

Korbel in His Own Words

Scroll down to read an essay on Josef Korbel's life and legacy.

Josef Korbel Speaks at the University of Denver in June 1964

Korbel was an up-and-coming Czech diplomat in 1948 when the communists staged a coup in his country. He fled Europe and ended up at the University of Denver, where he went on to found the school's Graduate School of International Studies.

Both women say Korbel inspired them to pursue public service, and echoes of his abiding belief in the merits of American-style freedom are clear in their public statements.

The current and former secretaries of state talk to Guy Raz about Korbel's influence as a mentor and, in the case of Albright, as a father.

Rice says that one thing she thinks she shares with Albright is "the belief that democratic values are at the heart of peace and stability in the world."

But Albright, the first woman to serve as secretary of state, recalls what Rice said to her when Albright contacted her in 1987.

"Madeleine, I don't know how to tell you this," Rice told Albright, "but I'm a Republican." (Albright served in the administration of President Bill Clinton, a Democrat.)

Albright says she thinks her father would be upset by developments in U.S. foreign policy.

"It's ruined America's reputation," Albright says. "He cared so deeply about America and felt so strongly about what an important source of authority it was."

But Rice has a different interpretation of Korbel's philosophy.

"When we're faced with questions about why you are willing to risk so much on behalf of people in the Middle East, Iraqis or Afghans, it's hard for me to believe that he would have wanted them abandoned to tyranny," she says.

A Tale of Two Korbels

In today's politically polarized environment, polemicists seek out philosophical theories to explain and justify the behavior of contemporary leaders and thinkers.

That's one reason for the recent obsession with dead academics like Leo Strauss, a political philosopher who happened to educate -- among others -- president of the World Bank and former Bush official Paul Wolfowitz, writer Robert Kagan, academic Allan Bloom and journalist William Kristol.

As a result, Strauss has been dubbed the "father" of the so-called neo-conservative movement.

His students are, most certainly, influential today. But man for man (or rather, woman for woman), the less-well-known academic Josef Korbel has arguably had a more enduring and practical impact on the history of American policy.

He was a refugee from his native Czechoslovakia twice: first, as a young diplomat working for the government-in-exile in London while his beloved country was occupied by the Nazis, and then again after 1948 when Czechoslovakia became a Soviet satellite.

He landed in Colorado, where the University of Denver offered him a teaching post. Eventually, Korbel founded the school's Graduate School of International Studies, and by the time he died in 1977, he left behind a legacy that spawned two generations of top diplomats and leaders.

Most prominent among his proteges are two women: his daughter, Madeleine Albright, and a music major from Birmingham, Ala., who stumbled upon one of his lectures in 1973, Condoleezza Rice.

Korbel was a man who believed in America's enduring mission. He was a fierce anti-communist, an enemy of tyranny, and, like Lionel Trilling, Arthur Schlesinger and Eleanor Roosevelt, a liberal Cold War hawk.

On audio recordings of Korbel from the University of Denver, the distinctive themes that pervade the views of Madeleine Albright and Condoleezza Rice are present.

"Freedom knows no national barriers," Korbel says in one speech. "It scatters and deepens in all directions. An understanding of this changing face of freedom unveils the secret to progress and to peace."

It's a line that either Albright or Rice could have delivered. And, in their own distinctive way, both women have clearly channeled Korbel.

His daughter, Madeleine Albright, used to call the United States "the indispensable nation." It's a phrase that Josef Korbel could have easily coined.

Condoleezza Rice told an audience in Cairo last year that America is "now taking a different course ... supporting the democratic aspirations of all people."

To Albright, Korbel was, above all, a father. "I was in awe of him," she said in a recent interview.

To Rice, Korbel was a dazzling mentor, the person she cites as having inspired her to become a diplomat.

But what they both acquired from Korbel was an intellectual curiosity about the world and a definitive view about America -- that it is, in fact, the "indispensable nation."

Korbel did not oppose the use of force. He was a strong proponent of U.S. intervention in communist Indochina. Although many of his allies on the left had quickly turned against the Vietnam War, Korbel became a reluctant opponent only in 1968. By that time, it was clear to him that a communist-ruled Vietnam would not lead to the installation of similar regimes throughout Southeast Asia.

He was a solid democrat -- an admirer of Roosevelt, Truman and Kennedy.

But the subject that informed his worldview above all else came from his own experiences with the tyranny of totalitarianism, whether in the form of Nazism or Stalinism.

Korbel died in 1977, more than a decade before the peaceful liberation of his birth country from the yoke of communism. We do know he lamented America's failure to come to the aid of Czechoslovakia when Soviet tanks charged into Prague in 1968. We also know that he was a staunch believer in the idea that freedom wasn't a concept limited to the West.

What we don't know is where he would stand today and what he would make of the Bush administration's ambitious plan to export democracy to the Middle East -- and which of his two best-known proteges' vastly disparate philosophies most accurately reflect his own.