Accessibility links
NBC Plugs into YouTube's Viral Growth YouTube, the wildly popular video-sharing Web site, was an underground phenomenon just a few months ago. Now, with millions of viewers and millions in venture capital, YouTube is entering into a deal with NBC to promote the network's programming on the site.

YouTube, the wildly popular video-sharing Web site, was an underground phenomenon just a few months ago. Now, with millions of viewers and millions in venture capital, YouTube is entering into a deal with NBC to promote the network's programming on the site.

Like most Silicon Valley success stories, YouTube started in a garage. Founders Steve Chen and Chad Hurley got frustrated when they were trying to share video with friends on the Internet and found the process too complicated.

They officially launched YouTube in December 2005. So far, they've raised more than $11 million in venture capital. The site is so popular that about 60,000 videos are uploaded to it each day. Fifty million videos are posted on the site at any given time, Chen says.

The site's fare ranges from the very silly -- teenagers lip-syncing to pop music -- to the deadly serious -- soldiers' videos of the war in Iraq.

Most of the videos are homemade by people largely under 30. Brooke Brodack (known as Brookers to her fans) got so popular -- one of her videos was viewed a million and a half times -- that she landed a Hollywood contract to produce television content.

The spoof, featuring SNL regulars Chris Parnell and Andy Samberg rapping about eating cupcakes and going to see The Chronicles of Narnia, was viewed millions of times. Nonetheless, NBC asserted its copyright and asked YouTube to take it down. It's now available for viewing on NBC's own Web site.

YouTube's founders say they have no interest in being another Napster -- the file-sharing network brought down by a series of copyright lawsuits from the music industry.

"We're developing tools and putting process in place to control what's going on in the site," Hurley says. "We ban repeat infringers. We've also built an automated process that makes it easier for copyright holders to notify us of infringement."

But NBC had to acknowledge that the viewing of its "Lazy Sunday" video online brought Saturday Night Live more attention than it had seen in years.

On Tuesday, NBC announced a deal with YouTube to post previews of its shows on the Web site.

Brian Haven, a senior media analyst at Forrester Research, says the challenge to traditional television comes from consumers who are starting to look to one another for entertainment. It's part of a trend he calls social computing.

But Clifford Nass, a professor of communications at Stanford University, says people may not always be enamored with each other's amateur videos.

"In the early days, when anyone could make a phonograph record, you could go to Coney Island famously and record your record -- you know everyone did it. And over time, people said, 'You know, I'd really rather listen to talented people doing this.'"

Still, Nass and others say that the availability of high-speed Internet and cheap video cameras have changed something about the way we communicate. And while everyone may not become a star, communicating with one another through moving images is likely to be a permanent part of modern life. 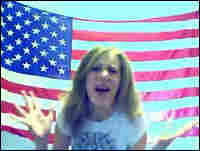 Brooke Brodack -- known as Brookers to her fans -- is seen in one of her videos. YouTube.com hide caption