Accessibility links
The Tense Middle Nobel Prize-winning chemist Roald Hoffmann believes the middle is a good place to be. It reminds the Cornell professor of the choices we can make in life and helps him see the possibility for change. 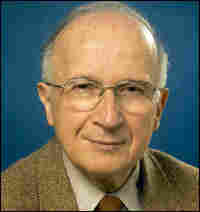 Cornell University professor Roald Hoffmann won the 1981 Nobel Prize in Chemistry. After surviving the Holocaust, he and his mother emigrated to America in 1949. In addition to research and teaching, Hoffmann enjoys writing poetry, plays and essays. Courtesy of Cornell University hide caption

I believe in the middle. Extremes may make a good story, but the middle satisfies me. Why? Perhaps because I'm a chemist.

Chemistry is substances, molecules and their transformations. And molecules fight categorization -- they are poised along several polarities. Harm and benefit is one.

Take morphine: Anyone who's had an operation knows what morphine is good for. But it's also a deadly, addictive drug. Take ozone: Up in the atmosphere, a layer of ozone protects us from the harmful ultraviolet radiation of our life-giving sun. But at sea level, ozone is produced in photochemical smog; it chews up tires and lungs.

Chemistry, like life, is deeply and fundamentally about change. It's about substances -- say A and B -- transforming, becoming a different substance -- C and D -- and coming back again. At equilibrium -- the middle -- all the substances are present. But we're not stuck there. We can change the middle; we can disturb the equilibrium.

Perhaps I like the middle, that tense middle, because of my background. I was born in 1937 in southeast Poland, now Ukraine. Our Jewish family was trapped in the destructive machinery of Nazi anti-Semitism. Most of us perished: my father, three of four grandparents, and so on. My mother and I survived, hidden for the last 15 months of the war in a schoolhouse attic by a Ukrainian teacher, Mikola Dyuk.

We were saved by the action of a good man, that schoolteacher. Sad to say, much of the Ukrainian population in the region behaved badly in those terrible times. They helped the Nazis kill us. And yet -- and yet -- some, like Dyuk, saved us at great risk to their lives.

I couldn't formulate it then, as a child, but I knew from our experience that people were not simply good or evil. They made choices. You could hide a Jewish family or you could choose not to. Every human being has the potential to go one way or the other. Understanding that there was a choice helps me live with the evil that I experienced.

Being a chemist has helped me to see plainly that things -- politics, attitudes, molecules -- in the middle can be changed, that we have a choice. Being a survivor I can see that choices really matter -- all part of this risky enterprise of being human.

The middle is not static... my psychological middle as well as the chemical equilibrium. I like that. Yes, of course I also want stability. But I believe that extreme positions -- the things you start out with in a chemical reaction, the things you finish with (all people A, bad, all people B, good; no taxes at all, taxed to death) -- all of these are impractical, unnatural, boring: the refuge of people who never want to change. The world is not simple, though God knows political forces on every side want to make it so. I like the tense middle and I am grateful for a life that offers me the potential for change.