The Supreme Court rules against President Bush on his administration's handling of war crimes trials for Guantanamo Bay detainees. The ruling says the proposed trials for Guantanomo detainees were illegal under U.S. law and international Geneva conventions.

And I'm Susan Stamberg. The Supreme Court today ruled against President Bush on the war crime trials of Guantanamo detainees. The Justices ruled five to three that the president overstepped his authority in ordering the trials, which the court says are illegal under U.S. law and the Geneva conventions. NPR's Nina Totenberg joins us from the court. Nina, tell us what the justices said that the president did wrong.

Well, the big thing he did wrong was to not go to Congress to ask for permission to have these tribunals and to use certain procedures. Justice John Paul Stevens, writing for the five justice majority, has issued a very lengthy opinion, some 73 pages. And there are impassioned dissents from Justices Scalia and Thomas, who both spoke from the bench this morning. Essentially, Justice Stevens said that the - yes, the president can order military tribunals under the uniform code of military justice, but unless he gets specific authorization from Congress or makes some sort of showing of necessity - which he didn't do here - he can't deviate in a substantial way from the way military trials are normally conducted. And the president has done that here.

He has set up a system, Justice Stevens pointed out, where the accused can be excluded from the trial, doesn't know the evidence against him in some cases. In fact, as Justice Stevens observed, in this case - this case was involving Osama bin Laden's driver - he had already been excluded from just the jury selection in his trial

The way this system is set up has given the appointing - what's called the appointing authority, Justice Stevens said - such extraordinary power that the president - through his appointed individuals - ends up sort of as judge, jury, and executioner. And he can't do that, certainly not without Congressional authority, which he doesn't have.

STAMBERG: Yeah, but now Nina, does this mean there will be no trials for the detainees at Guantanamo?

TOTENBERG: Well, it may mean that, unless the president now goes to Congress to get specific authority. One of the things that has happened in this case is that Congress has basically abdicated any responsibility to set up procedures. There haven't been hearings, there haven't been any, you know, any attempt to do that. The president hasn't suggested a model. Congress hasn't had hearings on any sort of models, and that may now have to happen. What the court said is you can detain these people as long as hostilities continue, but you can't impose criminal punishment based on a trial system that violates our laws.

STAMBERG: Yes, and now at the center of this case, a Yemeni citizen - as you said, he was bin Laden's driver. His name is Salim Ahmed Hamdan. Tell us about this case, his case.

TOTENBERG: Well, he was charged with conspiracy to violate the laws of war. And Justice Stevens said - writing for himself and three other justices a plurality - that even that charge is a violation of the Geneva Conventions, because the Geneva Conventions don't recognize conspiracy, that they require overt acts, and that nothing that Hamdan is charged with doing - driving Osama bin Laden, helping to move equipment around and military supplies - that none of that is considered an overt act that is a violation of the laws of war.

TOTENBERG: But that's just a plurality of the court. Justice Kennedy didn't join that part of the opinion. He didn't agree with it, he just said I don't think we have to go that far yet.

STAMBERG: Yeah. Now, we only have eight justices voting on this. How come?

TOTENBERG: Because Chief Justice Roberts participated in this case when he was at the lower court, the court of appeals. And that judgment was reversed by the United States Supreme Court today.

STAMBERG: So he had to recuse himself...

STAMBERG: ...in this one. Well, thank you very much. NPR's legal affairs correspondent, Nina Totenberg.

STAMBERG: To recap, the Supreme Court ruling against the Bush administration and its proposed military tribunals for detainees at Guantanamo Bay. The court said the president overstepped his authority, and that the tribunals are illegal under U.S. law and the Geneva conventions. We'll have more on this court decision later this hour. 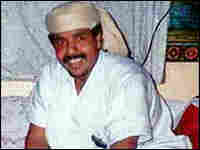 In a 5-3 vote, the Supreme Court ruled that President Bush overstepped his authority in ordering military tribunals for Guantanamo detainees. The court ruled that the tribunals violate U.S. laws and the international Geneva Conventions. Read the court's ruling:

Vote: Split 5-3, with moderate Justice Anthony Kennedy joining the court's more liberal members in ruling against the Bush administration. Chief Justice John Roberts recused himself from the case because, as an appeals court judge, he had backed the government over Hamdan. The Supreme Court's ruling overturned that decision. Justices Clarence Thomas, Antonin Scalia and Samuel Alito dissented.

Case Background: The case involves Osama bin Laden's one-time driver, a Yemeni citizen named Salim Ahmed Hamdan. The U.S. government says Hamdan was a confidant and bodyguard of bin Laden and helped transfer weapons from the Taliban to al-Qaida. Hamdan claims he was just a chauffeur. He says he was trying to return home in 2001 when he was captured by the Northern Alliance in Afghanistan and turned over to the U.S. military for bounty. Hamdan has spent four years in the U.S. prison in Cuba. He faces a single count of conspiring against U.S. citizens from 1996 to November 2001.

Legal Issues Involved: The Hamdan case tested the legality of the commissions set up to try Guantanamo detainees. The president claimed that his inherent executive powers allow him to try detainees such as Hamdan held at Guantanamo outside traditional military or civilian courts.

The White House argued that presidential authority was reinforced by Congress' Authorization for Use of Military Force, passed in the wake of the Sept. 11 attacks.

The administration said the detainees are not prisoners of war but "unlawful combatants," and as such, are not entitled to the protections of the Geneva Conventions.

"Congress has not issued the executive a 'blank check,"' adding: "Indeed, Congress has denied the president the legislative authority to create military commissions of the kind at issue here. Nothing prevents the president from returning to Congress to seek the authority he believes necessary."

Justice Stevens suggested that, if the U.S. government wishes to proceed with prosecutions of Guantanamo detainees, it would be best off using regular military courts-martial trials.

Scott Silliman, executive director of the Center on Law, Ethics and National Security at Duke University, estimates that such prosecutions would likely affect only 15 to 20 Guantanamo detainees at most. But in a conference call Thursday, some military and Justice Department officials said that as many as 80 could face some sort of legal action. Approximately 450 men are held at the U.S. prison camp.

Jurisdiction: In December 2005, Congress passed the Detainee Treatment Act, which stripped the federal courts of jurisdiction over at least some pending cases involving Guantanamo detainees. That made the Supreme Court's jurisdiction a key question in the Hamdan case.

But in its ruling, the Supreme Court asserted its right to review such cases.

"The Court's duty," Stevens wrote, "in both peace and war, [is] to preserve the constitutional safe-guards of civil liberty. " He added: "The Government has identified no countervailing interest that would permit federal courts to depart from their general duty to exercise the jurisdiction Congress has conferred on them."

The ruling also affects the dozens of habeus corpus petitions from Guantanamo prisoners challenging their detention that are currently before the District of Columbia Circuit Court. Thursday's opinion means that the Circuit Court does indeed have jurisdiction to hear those petitions.

Prior Cases: Two years ago, the high court rejected President Bush's claim that he had authority to seize and detain terrorism suspects and indefinitely deny them access to courts or lawyers. This follow-up case focuses solely on trials planned for some of those detainees.

Compiled from NPR staff and wire reports. The Associated Press contributed to this report.