Accessibility links
Emergency Rescue Plans in Place for Astronauts If Discovery's return to Earth shapes up to be a risky prospect, NASA has a series of rescue plans ready. Discovery is rigged to fly on auto pilot, and the astronauts can escape to the space station. The question would then be, who brings them home: Americans or Russians? 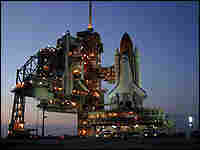 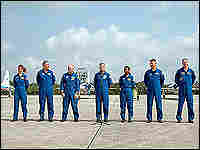 Discovery's crew arrives at the Kennedy Space Center on June 27. They will enter the shuttle approximately three hours prior to its 3:49 p.m. EST launch on Saturday. NASA hide caption 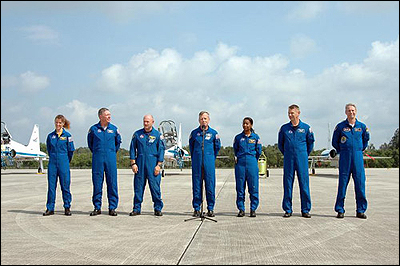 Discovery's crew arrives at the Kennedy Space Center on June 27. They will enter the shuttle approximately three hours prior to its 3:49 p.m. EST launch on Saturday. 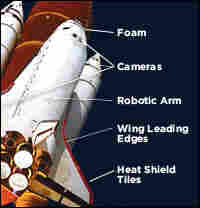 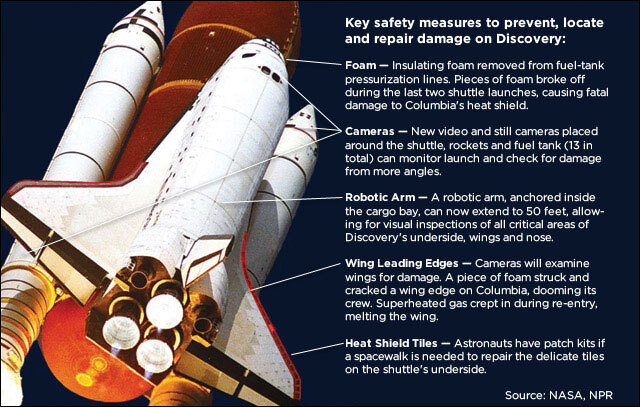 Enlarge image to read about the main changes designed to make Discovery safer during launch and in-flight.

NASA's next shuttle launch, scheduled for Saturday, will be the first to carry a special cable. It hasn't received much attention and everyone hopes it won't be necessary. The crew would use it to hotwire the shuttle so it could come back to Earth on auto-pilot, while the crew waits on the space station. That's one of many emergency plans NASA has been thinking about since the February 2003 Columbia accident.

Last year's launch was the first since Columbia, and it was a success -- with a couple of asterisks. A camera showed that during launch, a one-pound piece of insulation broke off the fuel tank. A similar chunk had punched the fatal hole in Columbia's wing.

Also on the way up, the shuttle plowed into a vulture.

For this upcoming launch, NASA has done more work on the foam, and a "road kill posse" is picking up dead animals to keep vultures away from the launch pad.

Earlier this month, NASA chief Michael Griffin said the future of the entire shuttle program is on the line.

"If we were to lose another vehicle, I would tell you right now that I would be moving to figure out a way to shut the program down," Griffin said. "I think at that point, we're done. I'm sorry if that sounds too blunt for some, but that's where I am."

Griffin spoke after a meeting called the "flight readiness review."

Two senior officials -- the lead engineer and the lead safety official -- had voiced concerns at the meeting about launching the shuttle without taking additional steps to prevent foam from coming off. But in the end, NASA decided to go ahead.

Griffin said he felt comfortable in part because there are emergency plans in place. If something damages the shuttle's delicate heat shields, the astronauts can try to repair them with onboard patch kids. But the kits have not been fully tested, and a repair operation is not simple.

Shuttle program manager Wayne Hale points out that the shuttle's thermal protection system has to withstand temperatures of 3000 degrees Fahrenheit on re-entry. That's as hot as the visible surface of the sun.

"The thermal protection system on the orbiter is a marvelous, marvelous invention," Hale said. "It weighs very little, and it insulates incredibly well. Now to say that we are going to go out on orbit and patch a hole in it that would be able to survive that environment; I mean that is a huge technological challenge we’ve been working on for the last four years now."

But then, what does NASA do with a repaired shuttle? Should the astronauts risk coming down in it? Or should they hang out on the space station and let the shuttle try to re-enter the atmosphere on its own? This is where the special cable could come in.

What we call it is a "remote control orbiter in-flight maintenance cable," says Steve Poulus, head of the orbiter project office. The cable is 28 feet long and weighs 5.4 pounds.

The cable would allow the crew to rig the shuttle so that the things they usually do themselves, such as lowering the landing gear and deploying the parachute, could be done automatically or controlled from the ground.

"I'm confident the orbiter could re-enter and land safely," Poulus said. "There have been enough tests. The orbiter is pretty much on autopilot through most of the re-entry profile. So this is something we can definitely do."

But there are risks here. If a patch doesn't hold and the shuttle breaks up, pieces could fall on populated areas.

Russians to the Rescue?

Which brings us to NASA's final option for what to do if the shuttle is damaged during launch: Dump it in the ocean while the crew waits on the space station to be rescued. NASA says there are 80 days of supplies. And a rescue shuttle -- Atlantis -- could be rushed to the launch pad in perhaps 25 days.

If such a mission has to be flown, Paul Dye will be the flight director.

"We can bring back a total of 11 folks, so that's a crew of four, going up and bringing seven people down," says Dye. It would be a tight fit, Dye admits, with seven astronauts lying down on their backs on the mid-deck floor.

The Russians could also send a Soyuz up to help bring people down.

But Dye says the chances of any of these emergency plans coming into play are small. Otherwise, he says, NASA wouldn't be going ahead with the launch on Saturday.