Accessibility links
Wayne Hale's Insider's Guide to NASA The general public might recognize Wayne Hale as that NASA manager on TV who talks about ice-frost ramps and the aerodynamics of foam. But for thousands of NASA workers and their friends, Hale is known for his thoughtful and lyrical emails reflecting on life at the space agency. 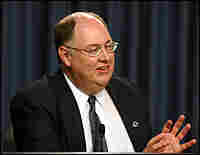 NASA is getting ready to launch its first space-shuttle mission in more than a year as it struggles to resume normal flights after the February 2003 Columbia disaster.

It's a critical time for the agency, and also for its space-shuttle programmer, Wayne Hale, who is in charge of the entire effort to get the shuttle flying again.

Hale talks about the weight of being responsible for a shuttle's fate and NASA's modern-day culture of exploration.

Moral Weight of the Columbia Disaster

Why a Career in Space

The Difficult Decision to Launch

Normally, you might see Hale on TV, talking about technical things such as "ice frost ramps" or the aerodynamics of foam. But Hale has another side. He's a compulsive e-mail writer who composes lyrical reflections on life at NASA.

Hale's emails are passed around among the thousands of people who work on NASA's shuttle program and their friends and families. Here, a sampling:

"Staying home is the short road to failure."
"Great risks must be faced in order to gain greater rewards."
"I have never ever been 100% certain, it has always been gray."
"Those of us who know [the shuttle] best know her shortcomings."
"Do we still have what our pioneer ancestors had?"

Every few months, thousands of people in the space-shuttle program open their e-mail boxes to find Hale's meditations on life, death and the meaning of rocket science.

The e-mails often describe the interior lives of behind-the-scenes workers at NASA. For example, when space shuttle Discovery blasts off, Hale will be watching from a spot at Kennedy Space Center called "The Firing Room."

It's where flight controllers make the critical decision about whether to go ahead with the launch and count down the final seconds. Hale knows exactly what they'll be feeling. He spent 15 years as a flight director in charge of re-entry, watching the weather and having to make a similar call: go or no-go. One recent e-mail described that feeling:

"I have given the Go 28 times. Every time was the toughest thing I have ever done. And I have never ever been 100 percent certain, it has always been gray, never a sure thing. But the team needs to have confidence that the decision was good. It is almost a requirement to speak the words much bolder than you feel, like it is an easy call. Then you pray that you were right."

Behind NASA's "Go Go Go" attitude, it seems, there's a lot of angst. And that's what Hale often talks about in his emails. They end up circulating far beyond his staff as people forward them on to friends and outside contractors.

The e-mails can be pensive, but also funny. Sometimes they sound like a sermon, other times like a letter from a close friend.

"I have this impulse that is just almost uncontainable of an idea that has to be expressed," Hale says. "I'm not sure I could suppress it if I wanted to. It's just got to come out."

Hale admits that for a mechanical engineer who normally just writes technical reports, this is a little unusual.

"You know," he says, "it's not easy for an engineer maybe to put words on paper."

But Hale does just that -- or at least he types the words onto a computer screen. He often composes his essays in airports and hotel rooms, whenever he's alone and has free time. The e-mails deal with things that NASA people might feel, but rarely talk about.

Inside a Flight Directors Meeting

In one, he describes the flight directors' last meeting with the astronauts before a launch. He paints a vivid scene of good friends and coworkers being desperately casual, trying to talk around their unspoken fear of disaster. He describes the bad jokes and the last minute reminders about wake-up calls.

"At the end," Hale writes, "we have the 'Ritual of the Handshake.' Everybody has to shake everybody else's hand before we leave. We look each other in the eye and say 'Good luck.' They always say, 'We're looking forward to a great flight.' Nobody ever talks about ... you know. But we all know."

It's a macho culture, Hale says. And it's one he has worked in for nearly 30 years. Hale wanted to be an astronaut, but he had lousy eyesight. So instead, he became the person who sends the astronauts up. And if you read his e-mail, you realize that both jobs take courage.

"The people who go into space, they have true courage. They put their lives on the line. They really put their physical person in harm's way," Hale says. "Most of us that sit on the ground, this is something we believe in, and if we're unsuccessful, it can be psychologically difficult. It's an emotional risk."

"I cannot speak for others but let me set my record straight: I am at fault. If you need a scapegoat, start with me. I had the opportunity and the information and I failed to make use of it. I don't know what an inquest or a court of law would say, but I stand condemned in the court of my own conscience to be guilty of not preventing the Columbia disaster. We could discuss the particulars: inattention, incompetence, distraction, lack of conviction, lack of understanding, a lack of backbone, laziness. The bottom line is that I failed to understand what I was being told; I failed to stand up and be counted. Therefore look no further; I am guilty of allowing Columbia to crash."

Now, he doesn't mention this in the e-mail, but Hale did listen to the engineers who were worried about damage to Columbia. He even requested photos that might have revealed the problem. Another NASA official canceled that request.

Still, Hale feels the wound. And he wrote that e-mail after a NASA employee told him that no top manager had ever taken any blame for the crash.

Hale says he may talk about this kind of stuff more than other people at NASA. But he says plenty of his colleagues seem to feel the same kind of anguish over decisions that they have to make every day.

"They don't normally talk about it outside the community very much," he says. "It's something that I think most folks, being the tight-lipped technical crowd that we are, have difficulty expressing in public. But we're all people, we think about the risks involved and the decisions we have to make. Sometimes those weigh heavily on you."

Just how much people worry became clear in the run-up to this mission, when two senior officials expressed concerns. They feared that the shuttle is still at risk from the same kind of foam damage that doomed Columbia. This time, however, the crew can be evacuated to the space station if things go wrong, so NASA administrator Michael Griffin decided the risk was acceptable.

In his essays, Hale writes a lot about why people need to take calculated risks. As well as the ever-present angst, his e-mails are full of excitement and inspiration.

In one story, he talks about growing up out West, hearing tales of the early pioneers. As a boy, he'd visit his great-grandmother, who walked alongside the family wagon. He writes that she faced everything from disease to bad weather to snakes:

"My grandmother was old, small and frail when I knew her. What shone through during those visits was a strength of character, a clarity of purpose and a directness in communication that made you forget the frailty of old age."

His e-mail goes on to ask, "Do we still have what our pioneer ancestors had?"

Hale believes that NASA, at least, still has that pioneering spirit. Hale admits that the upcoming shuttle mission is just doing rather pedestrian chores, like bringing supplies to the space station, but he sees that station as "our only foothold in the new frontier." And in his view, it's vitally important that we hold on to it.

"We are involved in what I think is the great and noble activity of our time," Hale says. "I personally am convinced that when they write the history books, 200 years from now, 500 years from now, they will say, 'Mankind moved out into the universe to stay, and that was the most important thing that happened.'"

But even if Hale thinks this is the most important thing he could be doing with his life, all of his writing makes you realize that tomorrow's launch will be nerve-wracking. This is the first flight with Hale as head of the space-shuttle program.

If something goes wrong, NASA's administrator has said he might kill the program. Hale sometimes longs to get away from the pressure.

"I frequently imagine myself doing something a lot less stressful than this," he says. "Wal-Mart greeter comes to mind. I don't know. It's a great job. I thoroughly enjoy what I do, most days. And frankly, I would pay to come get in the door, if they didn't pay me to come here."

Space shuttle Discovery is scheduled to lift off at 3:49 p.m. ET on Saturday, July 1.