Accessibility links
Doping Allegations Rock Tour de France A day before the start of the Tour de France, star riders Jan Ullrich and Ivan Basso have been banned from cycling's top event over doping allegations. Other competitors are also implicated. Phil Liggett of the Outdoor Life Network details the scandal for Madeleine Brand.

A day before the start of the Tour de France, star riders Jan Ullrich and Ivan Basso have been banned from cycling's top event over doping allegations. Other competitors are also implicated. Phil Liggett of the Outdoor Life Network details the scandal for Madeleine Brand. 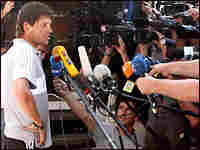 Germany's Jan Ullrich talks to the media in front of his hotel in Blaesheim near Strasbourg on Friday. A favorite to win, Ullrich has withdrawn from the Tour de France under the cloud of a doping scandal in Spain. Franck Fife/AFP/Getty Images hide caption 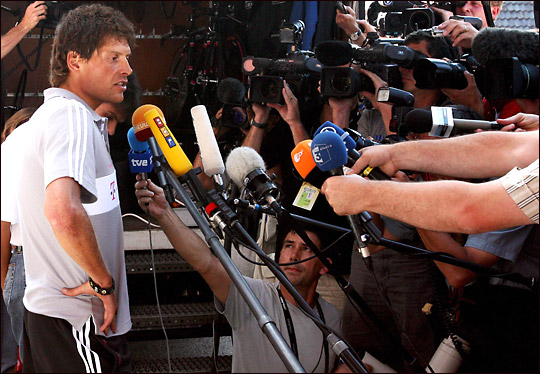 Germany's Jan Ullrich talks to the media in front of his hotel in Blaesheim near Strasbourg on Friday. A favorite to win, Ullrich has withdrawn from the Tour de France under the cloud of a doping scandal in Spain.

From NPR West, this is DAY TO DAY. I'm Madeleine Brand. Coming up: what Congress will do after the Supreme Court's Guantanamo decision.

First, though, a major doping scandal has hit the Tour de France, a day before the race begins. Two of the top cyclists were banned. They are star European riders Jan Ullrich and Ivan Basso. Others are also implicated.

Here now to give us some insight on the news is Phil Liggett of the Outdoor Life Network. It broadcasts the Tour daily in the U.S. He has reported on the Tour for some 34 years.

And Phil Liggett, how big a scandal is this?

Mr. PHIL LIGGETT (Reporter, Outdoor Life Network): Well, I think basically it's probably going to be the biggest scandal that's hit even a sport that's pretty well known for drugs use within it. But what it means - it's all come out of Spain, in fact, where there's been a drug bust in Madrid five weeks ago. And after five weeks investigation, the police seem now to have decoded a list of riders names. And the rumor is 20 of these riders are about to start the Tour de France.

Now, at the moment, there's only nine riders been officially told that they've got to go home because they are linked to the problem, but not necessarily involved in it. But because they are linked, there's a very strict code of conduct within the Tour de France, and therefore, the teams have been asked to send those riders home.

Now, the thing is, they're just about the most important riders in the race. Ivan Basso was second last year to Lance Armstrong. Jan Ullrich was third last year to Lance Armstrong. So the whole podium - considering the fact that Armstrong himself is now retired - the whole podium of last year's Tour de France is no longer taking part. The rider who finished in the top five last year, Francisco Mancebo, also is going home. And I don't think it's over yet. I think as the day gets over, there'll be more names announced.

BRAND: All right, so you say linked. What does linked mean? It must mean something because, you know, these top riders have been kicked out even before they've had a chance to...

Mr. LIGGETT: That's quite right. What it is - there has been a doctor Eufemiano Fuentes in Spain who has been allegedly dealing in the most banned drugged in the sport, which are growth hormones; the blood booster, which we call EPO; and packets of blood has been found in the flat.

Now, they've linked this blood with a list, which appears to be in code. And the police think that they've broken the code. There's a rumor that they're even using the dogs or the pets of the riders' names instead of the riders themselves. None of the riders' actual names have been found on these lists.

Now, it's being guilty by implication at the moment, not necessarily guilty at all. The riders themselves, of course, are denying any involvement with this doctor. But the rules state, that if you or your team are remotely linked to a drug scandal, until that drug scandal is cleaned up, then you can't ride the Tour de France. And the organization has pushed those rules all the way to the full.

BRAND: And do we have any Americans involved in this?

Mr. LIGGETT: No, none at all. Tyler Hamilton's name is said to be there, but Tyler Hamilton was banned from cycling two years ago for strange results in drug tests in the Tour of Spain. His name has been linked to this Dr. Fuentes. Hamilton's always said he never did it and has spent a lot of money trying to win an appeal, which so far he has not done. But he is the only American. There are no Americans involved whatsoever nor any members of the team - Discovery Team, which is here now and, frankly, are now favorites to win the race in the absence of these big names.

BRAND: Well, what does this mean for the race with these big names gone?

Mr. LIGGETT: Well, funny enough, the organization - you might expect everybody to be rather depressed and say, well, this is a major hit on the sport. And the organization has come back and said, look, the sport of cycling is one of the most wonderful sports in the world. They've always taken a strong stance against drugs. And, indeed, they've always tested as much or more, than any other sport the riders who take part. So as the result of all this, they are feeling rather upbeat. They think that they've nailed down a big doping cell in Madrid, and they've not been afraid to throw out the biggest names in the sport. And because of this, they feel very happy with the situation. Other riders, of course, not involved are saying we are about to have the cleanest Tour de France in many, many years. And it'll be the most exciting because of it.

BRAND: Phil Liggett of the Outdoor Life Network, thank you.

Mr. LIGGETT: Thank you very much.