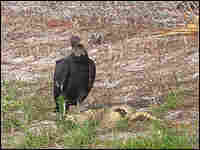 NASA is sweeping the grounds at Kennedy Space Center for road kill, and then using the carcasses as bait to capture vultures. The birds will be released after the shuttle launches. Here, a vulture and an armadillo outside the space center. Nell Boyce, NPR hide caption

The space shuttle Discovery is scheduled for a lift-off tomorrow at dawn from the Kennedy Space Center in Florida. The shuttle has not flown for a year. One of the worries is that lightning near the launch pad could delay it. Another worry is vultures.

NASA is working today to trap the birds. Last time, the shuttle began its grand descent by smashing into a bird, and NASA would rather not let that happen again. NPR's David Kestenbaum reports from the Kennedy Space Center in Florida.

Space shuttle versus bird. It's an old battle, and so far, shuttle has won.

Mr. DAVID STEITZ (Public Affairs Officer, NASA): Well, a few years back, we were trying to launch, and we found that there was a woodpecker that had come to the pad and was trying to peck into the external tank.

Mr. STEITZ: He was very persistent trying to peck his way into the tank.

KESTENBAUM: The solution? Owls, big plastic owls set up around the launch pad. It worked for the woodpeckers.

Mr. STEITZ: Unfortunately, we found that the vultures aren't afraid of the owls.

KESTENBAUM: Vultures aren't going to peck at the tank, but if the shuttle hits one, that could be a problem. The Columbia's shuttle wing cracked when it hit a piece of foam. John Shannon heads NASA's Mission Management Team.

Mr. JOHN SHANNON (Mission Management Team, NASA): You know, we laugh about it, but it is a serious risk. You know, we hit a bird one 114. We also immolated two other birds. We talk about a quarter pound of foam being catastrophic to the vehicle. These are four to six-plus pound birds. And it's deceiving when you come off the pad, but you get going fast really quick.

KESTENBAUM: The shuttle goes from zero to 100 miles an hour in five seconds, and NASA can't fix the problem by just killing the birds. Mike Leinbach is the shuttle launch director.

Mr. MIKE LEINBACH (Shuttle Launch Director, NASA): We live on a national wildlife refuse out here, and so we're not free to mess with the birds in a terminal fashion, let me put it that way.

KESTENBAUM: Yesterday there were some vultures around, soaring in grand circles and searching the ground for food.

KESTENBAUM: All right, I'm standing along one of the main roads heading into Kennedy Space Center, and just here outside the gate is a rather large raccoon. He's got very sharp teeth, a good nice coat of fur, some soft little padded feet, but he is quite dead, probably about a foot and a half long. Unclear how he died. He's just on the yellow painted line on the edge of the road here. There is an opening in his stomach, which I'm guessing is from a vulture. He's cute but quite dead.

KESTENBAUM: Glenn Willis is a scientist working with two contractors, SGS and Yang Enterprises. I showed him pictures of the raccoon, which he was less excited about when he heard it was off site. He has a team that's been going around picking up road kill over 140,000 acres. That has reduced the food supply, and it's provided bait for cages. The idea is to trap the vultures until the launch is over.

Mr. GLEN WILLIS (Scientist, SGS and Yang Enterprises): This week on the bill of fare we had a hog yesterday that we picked up. They apparently have a taste for raccoons, so we got quite a few raccoons. I believe that there was a couple of armadillo in there, too, a tasty, well-rounded meal for vultures, I guess.

Mr. WILLIS: I don't know if you've ever seen a crap trap. They go in and it gets narrower and narrower. And I guess if they were a little smarter, they could walk right back out again.

KESTENBAUM: Just before launch, NASA will fire some blanks from cannons, hoping the noise will scare any remaining birds away, but if that doesn't work, the 41/2-million-pound may have to wait for the birds to leave on their own. David Kestenbaum, NPR News, at the Kennedy Space Center in Florida.

BRAND: You can read an interview with Shuttle Program Manager Wayne Hale and see the safety changes NASA has made on the shuttle Discovery at npr.org.