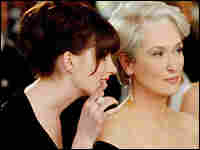 Our film critic reviews The Devil Wears Prada, a film adaptation of the novel by Lauren Weisberger.

Anne Hathaway stars as a young woman who comes to New York with aspirations in the fashion industry and becomes an assistant to a ruthless magazine editor, played by Meryl Streep.