Accessibility links
Checking in with Art Buchwald Renowned writer and humorist Art Buchwald is now best known for being not quite dead. In January, he decided to refuse dialysis for kidney failure and await death in a Washington hospice. Months later, he's still around and off to Martha's Vineyard.

Listen
Checking in with Art Buchwald 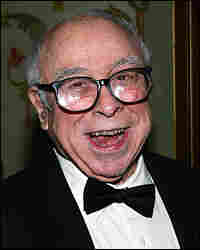 Renowned writer and humorist Art Buchwald is now best known for being not quite dead.

He made headlines in January when he decided to refuse dialysis for kidney failure and await death in a Washington hospice. But months later, Buchwald is still around -- and up for traveling.

"I'm feeling pretty good, apparently, because I was intending to go to heaven, and now it turns out I'm going to Martha's Vineyard," he tells Michele Norris.

The Man Who Would Not Die

This column was written by Art Buchwald from the hospice in Washington, D.C., where he was undergoing care. Buchwald stopped writing his regular column at the end of December, but offered this update on his condition, and his life, on March 7, 2006.

I am writing this article from a hospice. But being in a hospice didn't work out exactly the way I wanted it to. By all rights I should have finished my time here five or six weeks ago -- at least that's all Medicare would pay for.

What happened was, I was riding the elevator at the acute care facility next door when I saw a sign that said there was also a hospice in the building. I arranged a tour and everything looked very good to me.

I talked to my doctor, Mike Newman, and he said, "It's your choice. You're the only one who can decide what you want to do." Which was, I thought, a good answer. That's when I decided to discontinue dialysis.

One of the reasons for the decision was that I lost a leg at Georgetown Hospital. I miss my leg, but when they told me I would also have to take dialysis for the rest of my life, I decided -- too much.

Several things happened. My decision coincided with an appearance on Diane Rehms radio talk show. She has over a million listeners. I talked with her about my decision not to take dialysis. The response was very much in my favor. I had over 150 letters, and most of them said I did the right thing. This, of course, made me feel good.

It is one thing to be in hospice; it's another to get on the air and tell everybody about it.

When I got to the hospice, I was under the impression it would be a two- or three-week stay. But here I still am, six weeks later, and I've gotten so well Medicare won't pay for me anymore.

Now this is what it's like for someone who is in the hospice: I sit in a beautiful living room where I can have anything I want and I can even send out to McDonald's for milkshakes and hamburgers. Most people who are not in hospice have to watch their diets. They can't believe I can eat anything I want.

I have a constant flow of visitors. Many of them have famous names, so much so that my family is impressed with who shows up. (I would not be getting the same attention if I were on dialysis.) I hold court in the big living room. We sit here for hours talking about the past, and since it's my show, we talk about anything I want. It's a wonderful place to be, and if for some reason somebody forgets to come see me, there's always television and movies on DVD.

I keep checking with the nurses and doctors about when I'm supposed to pull out. No one has an answer. One doctor says, "Its up to you." And I say, "That's a typical doctor's answer."

I receive plates and baskets of delicious food -- home-cooked meals from my son and daughter-in-law, treats from the delicatessen and frozen yogurt from Haagen-Dazs.

Everybody wants to please me. Food seems to be very important, not only to my guests, but also to me. If they bring food, they get even better treatment from me. One day I told a friend I wanted a corned beef sandwich. The next day I got 10 corned beef sandwiches.

Also, I have received dozens of flower arrangements, something I would never get if I were on dialysis.

I don't know if this is true or not, but I think some people -- not many -- are starting to wonder why I'm still around. In fact, a few are sending me get-well cards. These are the hard ones to answer.

So far things are going my way. I am known in the hospice as The Man Who Wouldn't Die. How long they allow me to stay here is another problem. I dont know where I'd go now, or if people would still want to see me if I wasn't in a hospice. But in case you're wondering, I'm having a swell time -- the best time of my life.