Accessibility links
Keb Mo Unpacks Musical 'Suitcase' Kevin Moore, aka Keb Mo, talks to Michele Norris about his latest CD, Suitcase. He also discusses that uniquely American music form, the blues, and how he has created his own modern interpretation. 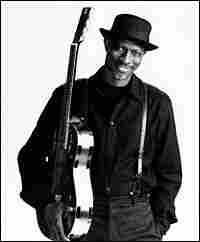 Suitcase is the eighth and most recent release from Kevin Moore, aka Keb Mo.

That "suitcase," Keb Mo tells Michele Norris, signifies all the past experiences that we drag along with us — and sometimes allow us to control our present-day lives.

The point of choosing the title, he says, is to show "that we can get rid of that stuff, that we don't have to carry it around with us."

Moore, who grew up in Compton, Calif., played the guitar very early in life. But he put it down occasionally, learning to play the French horn and studying architecture. In the end, he couldn't stay away from the six-string.

Keb Mo discusses that uniquely American music form, the blues, and how he has created his own modern interpretation.