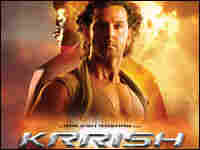 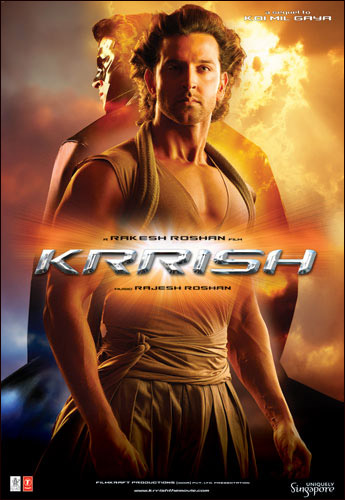 An official movie poster for Krrish.

You may know that Superman Returns has been the box office king this past week. But you may not realize that Americans are not the only movie fans flocking to the multiplex for a super hero, and some correct pronunciation. Another super flick comes from India, home of one of the biggest movie industries in the world, Bollywood. The latest Bollywood blockbuster is Krrish, K-R-R-I-S-H, it's the story of a caped superhero.

Commentator Sandip Roy says there are a few more similarities between Krrish and the Man of Steel, as well as some key cultural differences.

Here's how a superhero in the West gets the first inkling of his superpowers. When he's a little kid, he pushes a grand piano on top of the bad guy. The Indian superhero, Krrish, learns he's different at age six, when he can solve the math homework for eight-year-olds. Unlike Superman, who's played by a TV actor, Brandon Routh, Krrish is played by Bollywood superstar Hrithik Roshan. And a Bollywood superhero has one characteristic Superman doesn't: he can sing and dance.

ROY: Indians are quite used to superheroes. Hindu gods can turn into fantastic creatures, half lion, half man; they jump across oceans carrying a mountain on their back. They just don't wear their underwear on the outside. But Krrish is something new. He's a Western-style superhero, complete with mask, cape and the whole identity-shifting thing, just like Superman and Clark Kent.

And like Superman, his powers come from an extraterrestrial source. In an earlier movie, Krrish's dad is touched by an alien who bears a remarkable resemblance to ET. Of course, being an overachieving Indian superhero, not only can Krrish sail through the air and crack rocks with his punches, he's a computer whiz and he has pecks you can land a flying saucer on. Krrish can match Superman muscle for muscle, and he's cheaper. It's as if Superman returns to find his job has been outsourced.

Mr. BRANDON ROUTH (Actor): (As Superman): I know some people are asking a lot of questions now that I'm back. I think it's only fair that I answer those people.

ROY: In Superman Returns, it's an odd time for superheroes. Lois Lane wins a Pulitzer for her editorial: Why the World Doesn't Need Superman. In fact, the man in red and blue seems quaint now, a nostalgic throwback to more naïve times. Today, with Warren Buffett and Bill Gates pooling their billions for charity, it's the nerdy Clark Kents who are the new superheroes, taking on AIDS, malaria and public education.

It would have been really cool if Krrish had been a new kind of superhero for this new world. Instead, he's just a reissue of the Man of Steel, though he does have some foot-tapping rhythms.

ROY: After all, today India's biggest challenges aren't mad scientists. We have greater horrors to face. Last year, we swept the U.S. spelling bee. But this year, no Indian-Americans were among the last three finalists. Krrish can take on 10 bad bikers at once. He can outrun horses. But that's not enough. If there's a third movie, we're holding out for a hero who can spell Ursprache.