Accessibility links
New Orleans Kids Have Few Summer Options Kids in New Orleans are having a tough time this summer as many camps, movie theaters, pools and parks remain closed. Youth workers say they are scrambling to create fun diversions -- with limited resources -- to keep bored kids out of trouble. 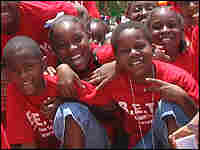 Bars and Restaurants Open and Ready for Business July 7, 2006 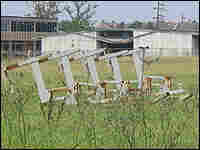 More families are streaming back to New Orleans, and the city now estimates that its population is about half of what it was before Katrina. That means thousands of kids around the city don't have much to do this summer. Camps, parks, teen centers and movie theaters remain closed. With crime and violence on the rise again in parts of the city, youth workers are trying to get as many programs running as they can to keep kids out of trouble.

Residents are moving back into New Orleans' Gentilly neighborhood, but it doesn't look like a very promising summer for the kids there. Trash is still in the streets, and kids don't have nearly as much to do as last year.

Antonio Zeno, 14, said he used to love to go swimming in the summer, but the local city pool is shut down.

"Yeah, that was our thing, going swimming. I used to go to summer camp in the Saint Bernard. It was a church/summer camp. It was my church and after [Katrina], it's all gutted out now. So we ain't doing nothing this summer," Zeno says.

He says NORD sports gave kids all over the city role models -- coaches who had good jobs or ran their own businesses.

Barabino grew up in a housing development playing city sports. Last summer, he coached his 6-year-old son's football team at Willie Hall Playground, where he played football as a kid.

"This is a part of me, this playground. When I came out here and saw the playground [after the storm], I was at tears because it was like you lost a loved one," he says.

Barabino opened the door to the park's equipment room to show the moldy helmets, cleats, shoulder pads and baseball gear that are scattered all over the floor. He says that across the city, most of the recreation centers were damaged like this.

After Katrina, says Barabino, this was the first place he came after checking on his own house, which also was badly flooded by the storm.

"I left my house, and I'd found all my furniture and everything in disarray. I felt bad, but I knew I had insurance for that," he says.

"I came here, and I said please let the equipment be good. And when I came and saw the watermarks and opened the door, I couldn't do nothing but just stand here..." he says. "It's lost; it's gone; it's ruined."

Barabino is trying to get as many parks re-opened as possible. But there are problems. A city official says FEMA won't pay to replant grass at the city parks.

The city estimates there is more than $60 million of damage to its park and recreation facilities. But the city and FEMA are pushing paperwork back and forth, trying to decide how much is reasonable for FEMA to pay for the various repair and rebuilding projects.

A Jumble of Neighborhoods

Youth workers around the city are concerned that the crushing summer heat could cause tempers to flash for kids who don't have pools, summer camps and other things to do.

Eighteen-year-old Wendell Butler, who works as a security guard at the New Orleans Convention Center, lives with his mother and family in the city's 7th Ward. He says he liked his old neighborhood better, but the house they used to rent in the 10th Ward was damaged.

A police officer nicknamed Sarge, who lived on Butler's old block, kept things under control, he says. And kids and teens from that neighborhood got along, he adds, because they grew up together.

Right now, the city's neighborhoods are jumbled with kids relocating from different areas. Butler and many other kids said that's sparking more fights over turf.

"They still with that turf stuff after the storm," he says. Butler says he stays inside most of the time he's home, except when he's walking his dogs or pet rabbit, which he walks on a leash. When he goes out, he worries about getting into fights.

Butler says he and his younger brother were jumped one day by several teens from a nearby housing project. They hit Butler with broken mop sticks. He says he fought back and told his little brother to run. A neighbor broke up the fight.

Police who work in the juvenile division say arrests of minors are still less than pre-Katrina rates. They're arresting 20 to 30 kids a week now; they used to arrest close to 150.

But the population is smaller now, and as people move back, arrests are rising.

Kingsley House is one program in New Orleans that's open. It's offering summer camp for 250 kids, which is 50 more than last year and as many as they can legally accomodate. They have another 100 on the waiting list.

Adrian Todd, Kingsley House's associate director, says other affordable camps across the city have long waiting lists, too. At Kingsley House, she says, kids can use a computer lab and take drama classes. They have a rebuilt playground with hoses and Slip 'N Slides, and basketball and swimming for those in the summer teen program.

Summer-camp participants also have to take part in programs such as alcohol-and drug-prevention, conflict resolution and anger management, Todd says.

Teenagers playing basketball at Kingsley House say the programs give them a lot to do this summer, though many miss friends that haven't returned yet.

They also say that it's much easier to find a summer job this year. New Orleans has a serious lack of workers, so employers are willing to hire younger teens -- at age 14 instead of 16.

And in some places, even dishwashing in a restaurant pays $10 an hour instead of last year's $5 an hour.