Accessibility links
Net Neutrality: What's at Stake? The folks who are for net neutrality say they're worried the Internet will become dominated by powerful companies that will encourage access to their own content, and to that of their business partners. Phone and cable companies argue that the Internet works well because it is relatively free of government regulation. 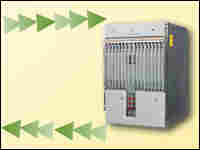 Data travel across the Internet in 'packets.' Currently, all packets get equal treatment. In the future, routers, which manage how data travels and ensure delivery, could act as traffic cops. Jeremy VanderKnyff, NPR hide caption

See How Data Gets to the Fast Lane
toggle caption
Jeremy VanderKnyff, NPR

The Internet is often described as a highway. But for this debate, it might be best to compare the Internet to the railways of the 20th century. The federal government may provide the right of way, but like railroads, large chunks of the Internet are owned by private companies.

As the Internet evolved from a communications tool to a commercial medium, the private firms that created the network infrastructure raised the possibility that they might start charging more for those who are willing to pay for faster delivery. They were responding to recent steps by the Federal Communications Commission that deregulated cable and phone providers that offer Internet access. That has led to calls for "net neutrality," a legal requirement for equal treatment of all information on the network. Here's the background on the debate, and what's at stake:

OK, so what exactly does "net neutrality" mean?

Well, for starters, it's not a "neutral" term at all. "Net neutrality" is language used by supporters of the concept, who believe that all data on the Internet should be treated equally (see illustration.) Companies that deliver services online want a guarantee that Internet service providers won’t offer cheaper prices to their allies, and use their power to squeeze out competitors.

The companies that oppose net neutrality are primarily cable and telephone companies, which maintain most of the private portions of the Internet. They see "neutrality" as a euphemism for government regulation designed to favor certain companies -- Google, Microsoft, Yahoo, Skype, for example -– that use the Internet to deliver services but do not pay to build or maintain the network.

So is this a battle between big companies?

Primarily, yes. Telecommunications firms like Verizon and AT&T say they have little incentive to upgrade Internet connections if all the available space will get sucked up by companies like Google and Microsoft. They feel they should be able to charge what the market will bear. The telecom folks say they don't want to relegate anyone to the "slow lane" (are you getting tired of the transportation metaphors?) Proponents of net neutrality, like eBay, Google and Amazon.com, say they all started out small and were able to grow, in part, because of the standards that guarantee equal access.

I'm sorry, I'm confused. When I see ads about net neutrality, it sounds as if both sides are saying they stand for "innovation" and "consumer choice."

Good -- that means you're paying attention. The folks who are for net neutrality say they're worried the Internet will become dominated by powerful companies that will encourage access to their own content, and to that of their business partners. A neutrality requirement, they say, will protect consumers by preserving the open structure that made the Internet popular and democratic.

Phone and cable companies argue that the Internet works well because it is relatively free of government regulation. They say net-neutrality regulations would require an "Internet police force" (probably the FCC) to enforce them. Companies would be leery of offering inexpensive Internet access if they feared government price restrictions. They also warn that government interference would discourage phone and cable companies from investing in upgrades to the Internet infrastructure, resulting in a slower Internet for everyone.

Democrats generally support net-neutrality language, but have not been able to entice enough Republicans, who have largely sided with the cable and phone companies, into their camp. Committees in both houses of Congress have passed telecommunications reform bills, but they have shot down efforts to attach net-neutrality requirements, and supporters are now hoping to stop these telecom bills from reaching the floor. If that doesn’t work, they plan to again try to add language that would limit the power of network providers. They also hope to introduce stand-alone legislation supporting net neutrality, but the Republican-led Congress could prevent such legislation from reaching the floor.

Will net neutrality pass this year?

Sorry, my crystal ball is cloudy today. It's always easier to block legislation than it is to pass it. In addition, there are a limited number of work days for legislative work, because lawmakers will start campaigning for re-election in November. So the issue may not go to a vote this year, but it will most certainly return.