Accessibility links
Musician Strays from Jazz for Iraqi Musical Tradition Amir ElSaffar put his New York City jazz club career on hold four years ago. ElSaffar, an Iraqi-American, put down the trumpet to learn the centuries-old singing style known as maqam. Having trained in the form, he has now released his own CD of the traditional music. 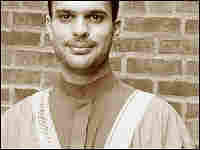 From 'Maqams of Baghdad'

Amir ElSaffar put his New York City jazz club career on hold four years ago. ElSaffar, an Iraqi-American, put down the trumpet to learn the centuries-old singing style known as maqam. He has now released his own CD of maqam and is writing music that blends the form with jazz.

ElSaffar traveled to Baghdad and London to study what some call the classical music of Iraq from the masters. Before that, Iraqi music was not a big part of his life. He grew up in the suburbs of Chicago, and jazz was his first love. After studying classical and jazz trumpet in college, he moved to New York City and worked as a sideman for pianist Cecil Taylor and others. He also led a band of his own.

Iraqi maqam is a repertoire of melodies — some of them dating to ancient times — that fit together into larger compositions. Texts range from secular poetry to Sufi mysticism. The complex improvisations and vocal flourishes can take years to master.

ElSaffar was curious enough about Middle Eastern music to attend a workshop in Massachusetts in 2001. "They were talking about Egyptian music or Syrian music or Lebanese music," ElSaffar says. "I was thinking, 'OK, where's the Iraqi tradition?' I learned it was in many ways a vastly different tradition than what is found in the rest of the rest of the Arab world."

Using $10,000 he had won in a trumpet competition, ElSaffar sought musical teaching in Baghdad (he left a few months before the U.S. invasion in 2003) and Europe. He learned how to play the santur, a traditional hammered dulcimer, and how to sing dozens of maqams.

ElSaffar released his first CD of maqam in June, and has been performing the music in the United States for audiences that include a lot of Iraqi expatriates. ElSaffar says he's been amazed at the emotional response the music can generate.

" I've seen people get teary-eyed," he says. "I've seen people cry at performances. People come up to me and say it's brought them back to Baghdad. They can just feel the energy of the place again."

Now, ElSaffar is trying to combine that energy with his first love. He is writing and performing music that combines elements of maqam and jazz.

Amir ElSaffar and his band played his composition Two Rivers for the first time this spring in Philadelphia. There will be another performance in October during the Festival of New Trumpet Music in New York City. But first, ElSaffar is spending the summer in Europe, continuing his education.