Accessibility links
Do You Understand Me, My Pet? Any dog lover will tell you that dogs respond to human behavior, often with loyalty and unconditional love. But do dogs really understand us?

Do You Understand Me, My Pet?

Do You Understand Me, My Pet? 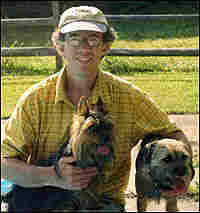 A dog's world is literally different than ours. They track every dizzying circle of a buzzing fly until they catch it in their mouths. They can hear ultrasound without going to the doctor's office.

And take something as simple as a bowl of warm chicken soup. We smell it, but they really smell it: Dogs have the ability to separate out smells like the water, onion, carrots and chicken.

With such differences in how man and man's best friend perceive the world, how well can we possibly be communicating? Any dog lover will tell you that dogs respond to human behavior, often with loyalty and unconditional love. But do dogs really understand us?

Blumberg has spent much of his career with dogs -- both real and imagined. He studies how dogs are trained and then creates virtual dogs that respond in the same way. In the process, he's learned a lot about how dogs perceive their world.

In some ways, says Blumberg, your dog understands you better than you think. When dogs communicate with one another, they're attuned to sounds and smells, but also to the subtle changes in ear positions or tail positions. And they're checking you out just as closely as they do other dogs or that buzzing fly.

"They are all about subtext, not text," Blumberg says. Dogs are observing if your head is cocked, if your body is leaning forward or backward, and where you're looking. And they're listening to how you say a word rather than knowing what a particular word means.

Blumberg believes that as dogs move through life, they are making sense of their world through reliable associations. They understand which body movements of their owners lead to happy times for themselves: walks in the park, treats and petting.

Is It All About Manipulation?

So dogs know how to read their owners to get what makes them feel good, but is that where the understanding ends?

Patricia McConnell, a zoologist and author of the book, The Other End of the Leash, says we don't understand the complexities of dogs' motivations, but she does think there's more going on than manipulation. Just like us, dogs want to make a social connection.

Beyond that, what's going on in a dog's head gets hazy. Some owners swear their dogs know them better than their human family and friends. McConnell doesn't go that far.

"My own belief is that dogs are indeed capable of a higher level of sharing, and there are some cases in which dogs can be empathetic, but probably not as often as we think,"she says.

Dr. Marc Hauser of Harvard’s Primate Cognitive Neuroscience Laboratory says it's not clear how much a dog understands you beyond recognizing through your body language and tone that your mood has changed.

It's a bigger leap to say that your dog understands why you're feeling a certain way -- for instance, that he could understand you are experiencing loss after a family member dies.

Hauser says there's a big difference in cognitive ability between this higher-level empathy and plain old sympathy. Creatures can exhibit compassion for one another without necessarily being able to put themselves in another's shoes.

A dog's response to us could be rooted in any number of possibilities, Hauser says. We simply don't know.

"We have no evidence one way or the other," Hauser says. "This is not to deny that dogs might have empathy, but the right studies haven't yet been done."

So when your pup is lying on your pillow, ears flopped, eyes gushing with love, is he really thinking about you or just what makes him happy?

Blumberg says the relationship, "works for dogs and works for people." Perhaps we can just leave it at that.