Accessibility links
Shedding the Weight of the World, and a Band Those familiar with Radiohead's Thom Yorke — the great rock poet of anxious despair, whose internal dialogue revs like a thousand engines stuck in neutral — might be skeptical of any attempt to give his inner doomsayer the day off. But he's determined to try.

Shedding the Weight of the World, and a Band

Shedding the Weight of the World, and a Band 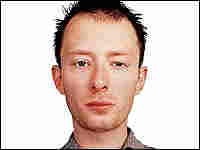 "Atoms For Peace," one of nine laptop-electronica gems on Radiohead singer Thom Yorke's solo debut, begins with an instruction. "No more going to the dark side with your flying saucer eyes," Yorke sings, close to the microphone, seemingly replicating the voice that rattles inside his head.

Those familiar with Yorke — the great rock poet of anxious despair, whose internal dialogue revs like a thousand engines stuck in neutral — might be skeptical. It seems unlikely that he'll get far giving his inner doomsayer the day off; the dark side is, after all, his default place. But he's determined to try: As "Atoms for Peace" snakes around, driven by a minimalistic clicking pulse and an impossibly liquid synth-bass line, glimmers of hope appear — particularly on the refrain, where Yorke's falsetto sounds light and wiggly, no longer carrying the weight of the world.

With about every third line, Yorke sounds like he's seeking a less cryptic, fundamentally new type of communication, one that maybe doesn't involve tumbling down the psychic wormholes from which Kid A emerged. He's mostly cagey about it, but when he sings "No more talk about the old days, it's time for something great," the shift in tone and intention is hard to miss: Tired of being tortured, he's a rock star making that first-solo-album lunge away from everything he's created, and flying headfirst into another abyss entirely.