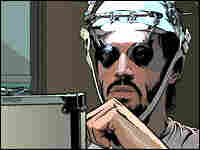 Hollywood has often looked at science fiction writer Phillip K. Dick for inspiration. Blade Runner, Total Recall and Minority Report were all adapted from his work. And now comes A Scanner Darkly, which Bob Mondello says offers a future with a very different look.

The coolest thing about the movie version of A Scanner Darkly is how very literally it takes the scanner part of that title. The story is about identity, how it shifts and mutates, and the director had to find a way to represent a character who if scanned would be - well, let's let his handler describe it from the film.

(Soundbite of the film "A Scanner Darkly")

Unidentified Man (Actor): (As character) And you'll notice that you can barely see this man, because he is wearing what is called a scramble suit. The exact same suit he wears, and in fact must wear, during certain parts, in fact most parts of his daily activities of law enforcement.

This man, whom we will call Fred, because that is the code name under which he reports the information he gathers, once within the scramble suit cannot be detected by even the latest in voice and facial recognition technology. The scramble suit itself is purportedly made up of approximately a million and a half fraction representations of men, women and children.

MONDELLO: Now, how would you represent that on screen? Director Richard Linklater decided to use a technique called interpolated rotoscoping, that he'd previously used in his film Waking Life, to give himself a head start. Interpolative rotoscoping means filming the story with live actors and then animating their images so they look sort of painted.

In a Scanner Darkly the effect is that Keanu Reeves, who plays the undercover cop, looks like he's been photographed, and then the photo's been faxed, and then the fax has been copied, so that the planes of his face have become blobs of uniform color, like a paint by numbers portrait.

When he moves, the blobs shift and their outlines vibrate and wriggle. It's a neat effect, even before he puts on the scramble suit, which layers him with images of other people. And it fits nicely with the trippy chatter provided by Philip K. Dick.

(Soundbite of film "A Scanner Darkly")

Mr. KEANU REEVES (Actor): (As character) What does a scanner see? Into the head? Down into the heart? Does it see into me, into us? Clearly or darkly? I hope it sees clearly because I can't any longer see into myself.

MONDELLO: So okay the dialogue is as out there as the effect. Now to what effect are they being put? Well, the story has to do with an addictive drug, Substance D, and our boy, Keanu, who is a narc. He is so deep undercover that even his bosses don't know who he is when he's not in his scramble suit. And they assign him to watch himself on secret cameras they've hidden in his house.

At which point he discoveries that his paranoid roommate, played by Robert Downey, Jr., is also watching.

(Soundbite of film "A Scanner Darkly")

Mr. REEVES: So what did you do?

Mr. REEVES: You should have told me.

Mr. WOODY HARRELSON (Actor): (As character) What if they come in through the back door or the bathroom window like that infamous Beatles song?

MONDELLO: That's Woody Harrelson as a stoner in full flower, and when he's tormenting Downey, who spends much of the movie doing terrific hopped up druggy riffs, things are great fun. When the conspiracy stuff kicks in and the plot goes global, things are less interesting. At which point you'll be thankful that the visuals in A Scanner Darkly scan so unusually, unusually enough that they even make Keanu Reeves seem -animated. I'm Bob Mondello.