Accessibility links
Pirates 101: Fact and Fiction on the High Seas With the release of Pirates of the Caribbean: Dead Man's Chest -- and thanks to Johnny Depp, who plays the zany Captain Jack Sparrow -- pirates are chic once again. Here lie some valuable nuggets of information about pirates, buccaneers and privateers. 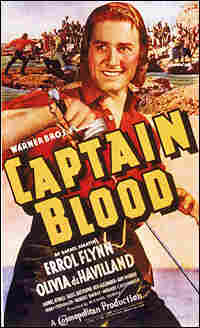 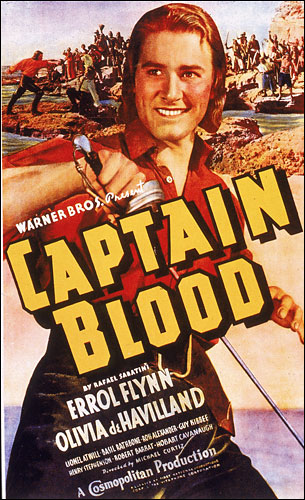 Hollywood has churned out more than 70 films about pirates. Films like Captain Blood gave audiences Errol Flynn as dashing, clean-cut pirates, who rescued damsels in distress and vanquished hammy villains in spectacular swordfights.

Was Tortuga an actual pirate city? What does one do when urged to "avast!"? And did pirates really wear such thick eyeliner?

With the release of Pirates of the Caribbean: Dead Man's Chest -- and thanks to Johnny Depp, who plays the zany Captain Jack Sparrow -- pirates are chic once again. Here lie some valuable nuggets of information about pirates, buccaneers and privateers:

Q. Were there pirates in the Caribbean?

Quite a lot of them, actually. The 17th century has been called the "Golden Age of Piracy" in the Caribbean. Numerous pirates plied those waters, pillaging, plundering and pilfering. Even Tortuga -- the pirate city depicted in the first Pirates of the Caribbean film -- existed, founded by buccaneers in 1630 on an island off Haiti.

Q. What's the difference between a buccaneer and a pirate?

A pirate is anyone who robs on the high seas. A buccaneer was a pirate who plundered in the Caribbean. The original buccaneers were French renegades who lived off stolen livestock on Hispaniola (which today is Haiti and the Dominican Republic). They smoked their meat over open fires, and so the French word for that process -- boucaner, meaning "to smoke-dry" -- became associated with them. This group later made their base on Tortuga and turned to piracy.

A. Yes, and the town, which was also featured in the first film, served as the capital of the British community in Jamaica in the 17th century. But ironically, the Brits in Port Royal welcomed pirates initially, in part because of the money they spent but also in hopes that the pirates' fearsome reputation would keep the Spanish and French from attempting to capture Jamaica. It worked.

Yes and no. In some cases, the British government actually commissioned seamen to commit acts of piracy, but with one catch: They were charged to prey only upon Spaniards, British rivals on the high seas and in the New World, and turn over a large portion of the stolen loot to the government. Sir Francis Drake was one such privateer (licensed pirate). In the 16th century, he plundered countless Spanish ships and ports around the Caribbean, stealing the equivalent of millions of dollars in today's money, all in the name of the British crown. To the English, Drake was a national hero. To the Spanish he was, well, a pirate.

The Spanish and French also licensed pirates to harass their European rivals, as a cheap way of waging naval warfare. But the system grew rife with abuse, since most privateers couldn't be trusted to limit their pillaging only to enemy ships. Many also balked at relinquishing any of their ill-gotten gains to their governments.

The abuses of the privateering system, and the presence of so many scruffy free-agent pirates, led to a decision by the British authorities in the early 18th century to begin cracking down on piracy in the Caribbean. Port Royal officials shifted from welcoming pirates to hanging every one they could catch. Their corpses were then displayed as a warning, like the three whom Jack Sparrow salutes early in the first Pirates film.

Q. How about the "Pirates' Code?" Any truth to that?

The first film makes much of the "Pirates' Code." When Elizabeth Swann (played by Keira Knightley) is about to be seized, she asks for a parley, invoking the "Code of the Brethren, set down by the pirates Morgan and Bartholomew." Clever film fiction, right? Wrong. Turns out Sir Henry Morgan and Bartholomew Roberts were actual pirates, members of a loose confederation of buccaneers called the "Brethren of the Coast," centered on the island of Tortuga in the 1600s.

Even the code existed as a historical fact, and as in the movie, involved issues of fairness among the pirates. "No prey, no pay" was a common principle, but equal shares in the plunder was also valued. So, perhaps there existed some honor among thieves.

Q. Did pirates make their prisoners walk the plank?

It makes for great film drama, but pirates didn't actually do this -- though not because of gentlemanly qualms. In fact, real pirates tended toward even nastier behavior, like gruesome tortures (holding lighted matches to a victim's eyes was a favorite) or hacking their prisoners to death with swords.

Q. Why, then, do we associate pirates with walking the plank?

We have novelists and playwrights to thank for that. Two beloved British children's classics in particular -- Robert Louis Stevenson's novel Treasure Island (1883) and J.M. Barrie's play Peter Pan (1904) (which he later fashioned into a novel) -- have forever linked pirates to such fictional notions as treasure maps and walking the plank.

But surprisingly, certain characteristics of Long John Silver, Captain Hook and other fictional pirates have some basis in actual history. Pirates did indeed dress in colorful garb, they prized parrots (which could fetch a high price in Europe), and they flew the Jolly Roger flag to intimidate their victims.

Q. So, pirates did look like Captain Jack Sparrow?

Probably not the eyeliner, though many pirate captains wore rich velvet waistcoats and foppish big hats with feathers. The legendary Blackbeard sported dreadlocks and liked to braid his long beard and tie it in ribbons. But lest you get a girlish image here, you should know that when attacking, he was famous for sticking lighted matches under his hat and in his beard, which set off his wild-eyed gaze and thoroughly terrified his victims.

Q. Did piracy disappear after the 18th century?

Hardly. Nearly 300 pirate attacks occurred on the high seas last year, many taking place off the coasts of Indonesia, Somalia and Bangladesh. Though pirates today forsake the velvet waistcoats for military fatigues and the flintlock pistols for machine guns, they act as pirates have always acted -- using intimidation, violence and even murder to steal all they can from ships and their crews. Despite our entrenched association of pirates with the 18th-century Caribbean, piracy has existed for as long as people have used the sea for trade, and will forever bedevil ships on the high seas.

If these piratical facts whet your appetite for more pirate lore, check out David Cordingly's fascinating book, Under the Black Flag: The Romance and Reality of Life among the Pirates.

Cathy Schultz is a history professor at the University of St. Francis in Illinois, and writes a syndicated column on historical films.