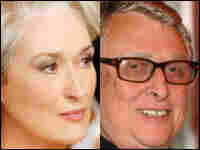 Coming up, the nephew also rises. But first, The Devil Wears Prada came in second only to Superman last weekend. The movie earned $27 million and new respect, if that's possible, for one of the most respected actors in film. The reviews for Meryl Streep have been uniformly sterling. She apparently steals the show with a pointy-clawed performance as the frosty fashionista Miranda Priestly.

MERYL STREEP: (As Miranda Priestly) My flight has been cancelled. There's some absurd weather problem. I need to get home tonight. The twins have a recital tomorrow morning at school.

ANNE HATHAWAY: (As Andy Sachs) What?

STREEP: (As Miranda Priestly) At school!

HATHAWAY: (As Andy Sachs) Absolutely. Let me see what I can do.

HATHAWAY: (As Andy Sachs) Hi. I know this is totally last minute, but I was hoping that - yes! Yes, hi. I need to get tonight from Miami to New York. Yeah. Sorry. Hold on. Hello. Miranda, hi. Look, I'm trying to get you a flight, but no one is flying out because of the weather.

(SOUNDBITE OF A THUNDERCLAP)

STREEP: (as Miranda Priestly) Well, someone must be getting out. Call Donatella. Get her jet. Call everybody else that we know that has a jet. Irv? This is your responsibility. This is your job. Get me home.

SIMON: That's Meryl Streep making road kill out of Anne Hathaway, as Meryl Streep's new assistant. Last weekend's audience for The Devil Wears Prada was reportedly four-fifths women. What did they do with the other fifth?

Our entertainment critic Elvis Mitchell joins us from KCRW in Santa Monica, California.

Elvis, thanks for being with us.

ELVIS MITCHELL: Thank you, Scott. And I always thought that title refer to you, The Devil Wears Prada.

SIMON: Is just word that Meryl Streep is a lot of fun to watch making this film a hit?

MITCHELL: Oh, I think that's part of it. Because it really - in some ways the movie feels like kind of a sitcom. But it's the Streep performance and the way people react to her that elevates the movie.

MITCHELL: What's fascinating to watch about her, you can always condense what she does down to a movement. And in The Devil Wears Prada, it's the way she flings an endless procession of coats and bags onto the desk of her hapless new assistant, who's blinking with fear almost every time she strides into camera range.

But I think what's fascinating to me about watching this is that as soon as I saw her, and the way she moves her jaw, there's really kind of an imperious thrust to her jaw...

MITCHELL: ...and the way she pursed her lips, I thought, she's doing Mike Nichols.

SIMON: I've been told you were going to say this. I've never been on a Mike Nichols film set, but he's a great director. But not known as one of the warm ones, as great magazine editors frequently, or at least, infrequently known as one of the warm ones. Is there something to the fact that of the relationship between actor and director, that Meryl Streep is embodying in this impersonation, or more than impersonation, really, of a magazine editor?

MITCHELL: Having worked for him three times, and in the movies that he directed her she played real life figures. In Silkwood, and the adaptation of Nora Ephron's Heartburn, and Postcards from the Edge from Carrie Fisher's novel.

MITCHELL: In each of those cases she plays somebody who is either a real person or kind of (unintelligible) person, not unlike The Devil Wears Prada. And there's this kind of amused predatory quality to it that - constantly kind of sizing things up in the way that Nichols is sizing up the camera when you see him. It's a sort of ethos that I don't have any time to waste on somebody who isn't bringing her A-game, and if you're not bringing it, then why are you here. And that's certainly a sense you get from watching the movies that Nichols has directed or the New Yorker profile of a few years ago. He's somebody who doesn't see the merit in wasting time, and that is, in fact, a real part of those movies that he's made. There's a kind of - a clinical precision to them. You know exactly what it is he's trying to express, there's no lost or wasted motion. And that's the way Miranda Priestly leads her life in the way she deals with everything.

MITCHELL: I did see that. It's funny too to see these two things at - I'm sure right next door to each other in certain theatres, and she couldn't be more full of the milk of human kindness and concern and worry. And you're watching that, you sort of think that she could actually be the mother of a character Anne Hathaway plays in the Devil Wears Prada. It's an interesting kind of circle that these two movies seem to have.

SIMON: Elvis Mitchell is our entertainment critic here at WEEKEND EDITION. He's host of KCRW's The Treatment. Thank you.

MITCHELL: You really don't expect me to talk to you when you're wearing those socks, do you?