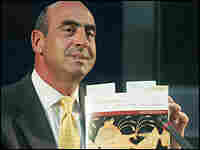 The Greek government and the J. Paul Getty Museum in Los Angeles announce an agreement to return two works currently held in the Getty's collection.

While the Getty won't discuss details, a 6th century B.C. votive relief from the island of Thassos and a 4th century B.C. stele, or grave marker, from Thebes will be returned to Greece after the government was able to prove they were stolen.

The setback for the museum comes as its former curator of antiquities is on trial in Rome for her role in acquiring illicitly excavated artifacts from Italy.