Listen
Chechen Rebel Was Proud of Attacks on Russians

Today, Russia is welcoming the death of its most wanted man. Shamil Basayev was a leader of Chechen rebels, an airplane hijacker, and a hostage taker. His most notorious crime was the Beslan school siege that left hundreds dead. Basayev's own turn came yesterday, in an explosion.

NPR's Lawrence Sheets, met Basayev many times while he was covering the wars in Chechnya. And he's on the line.

And Lawrence, what was he like when you met him?

Basayev was definitely an extremely serious and driven character. At the same time, generally he was very understated in his demeanor. He could be almost serene in a way, and deceivingly charming. He had a lot of charisma, often known for his acerbic sense of humor. He laced almost every sentence with irony, with jokes. But let's make no mistake about it, we know that Basayev was a man capable of very cold-blooded ruthlessness. We know that from his planning of the school seizure, in Beslan, in southern Russia. All this in the name of his mission.

He saw his historical mission, that began as a struggle for Chechen independence, and later morphed into this goal of setting up a quasi Taliban, if you will, like Islamic caliphate all over the Muslim parts of southern Russia.

INSKEEP: Hmm. How did Russian security force finally get him?

SHEETS: Well, there're two versions, actually. Both versions agree that Basayev and several of his cohorts were killed, while loading explosives into a truck in the southern Republic of Ingushetia. But that's where the diversions diverge, Steve. The Russians are now saying that, that explosion was detonated as part of a special operation - they're not saying just how - against a group of Chechen militants, including Basayev.

But the local government officials, some of them in Ingushetia, and police officials there, say he was killed as part of a mishap, when the rebels accidentally set off the munitions. That's the same version that the separatists are putting out. They say that the Russian Special Forces did not kill him, but rather Basayev died when these explosives detonated.

INSKEEP: Lawrence, when you spoke with this man, Basayev, did he ever indicate what he expected to happen after his death? Or did he foresee his own death?

SHEETS: He absolutely talked about his own death, and said that he was one of many, and that his mission was no different than any other Chechen who was fighting to rid his homeland of Russian influence, and basically retaliate for what they saw as atrocities having been committed by the Russian military. This was a man who didn't really care that people called him a terrorist. He wore that label like an emblem at the end of his so-called career, having denied that he was a terrorist in earlier years. In the end for Basayev, the ends justified the means. And the ends were driving the Russia out of Chechnya and setting up this Islamic state.

INSKEEP: So Lawrence, the Russian President Vladimir Putin can say that they stopped this man from one more big attack, near this G8 Summit that's coming up in St. Petersburg. But where does this leave Russia in dealing with this separatist movement, now, that's dogged them for years?

SHEETS: Well, the separatist movement has become increasingly marginalized and radicalized. Shamil Basayev was the last remaining towering figure, left over from 10 years ago, 12 years ago, when the first Chechen war started. His elimination means that virtually all of the major figures are now gone or in exile. It's a huge victory for Russia, as they try to deal with this increasingly weakening separatist movement. 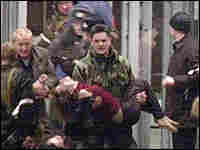 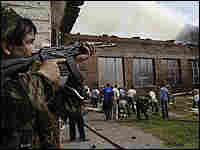 Troops secure the area outside of a school in Beslan, Russia. At least 331 civilians (many of them children) were killed in the resulting explosions and gunfire that ended the two day standoff with Chechen gunmen inside the school. Oleg Nikishin/Getty Images hide caption

Chechen separatist leader Shamil Besayev, killed today by Russian forces, was wanted in connection with numerous terrorist attacks throughout Russia and Chechnya in the last 15 years.

Nov. 9, 1991: Basayev and two compatriots hijack a Russian passenger jet, diverting it to Ankara, Turkey. After giving a press conference to alert the world to the cause of the Chechen separatists and securing safe passage for himself and the other hijackers, Basayev releases the hostages.

June 14, 1995: Basayev leads Chechen fighters in an attack on a hospital in Budyonnovsk, about 90 miles north of the Chechen border. Some 1,000 people are held hostage and about 100 people are killed; dozens more die when Russian troops unsuccessfully storm the hospital on June 17.

May 9, 2004: A bomb rips through a stadium in the Chechen capital, Grozny, during a Victory Day ceremony, killing President Akhmad Kadyrov, the Kremlin's point man for efforts to control separatist violence in the region. As many as 24 people are killed.

Sept. 1, 2004: About 30 gunmen seize a school in the southern town of Beslan. 331 civilians (including over 180 children) die in explosions and gunfire that ended the standoff two days later.

Oct. 13, 2005: Gunmen launch a series of attacks on police in Nalchik, capital of the tense Kabardino-Balkariya republic, near Chechnya. Basayev claims credit for planning the attack, in which 139 people were killed, including 94 militants.