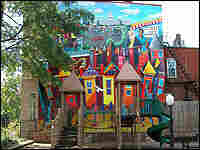 "Community," by Anne Marchand, was made possible by the DC Commission on the Arts and Humanities, DC Creates Public Art Program. hide caption 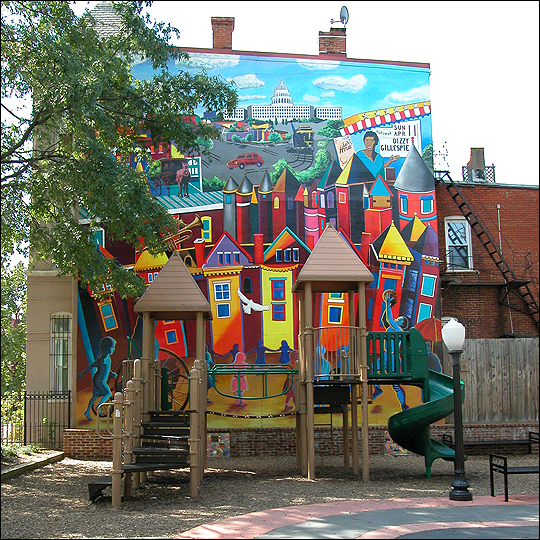 "Community," by Anne Marchand, was made possible by the DC Commission on the Arts and Humanities, DC Creates Public Art Program. 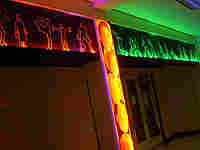 "Emery, You Light Up My Life," by Cheryl Foster, was another work supported by the DC Commission on the Arts and Humanities, DC Creates Public Art Program. (In partnership with the Department of Parks and Recreation.) hide caption 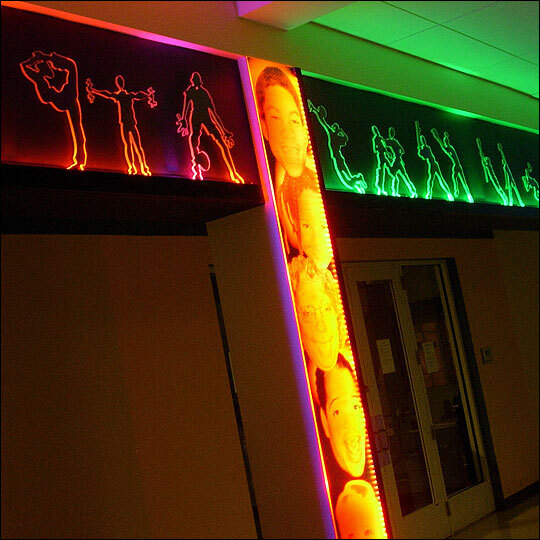 "Emery, You Light Up My Life," by Cheryl Foster, was another work supported by the DC Commission on the Arts and Humanities, DC Creates Public Art Program. (In partnership with the Department of Parks and Recreation.)

A 34-foot square mural on the side of a house serves as a vibrant background for the Westminster Playground in Washington, D.C.

Watching her toddler at play, Dorota Toro describes what she likes about the mural.

"The color scheme and the composition, the surreal aspect to it, the different themes for the community," Toro says. "It makes this park what it is."

The mural is called Community. It was created in 2002 by Anne Marchand, who received a commission from the District of Columbia Commission on the Arts and Humanities.

Before the mural existed, there was a playground. And a problem:

"The wall overlooking the playground was so dismal," said Lynn Johnson, who lives across the street.

Now the mural brightens the playground in a deeply personal way.

"It speaks to their dreams in some way," Marchand said. "It was based on their idea of what their community has been and could be."

Marchand said meetings with community members helped her discover what they found meaningful.

Marchand's work tied together many elements: images of transportation over the years; jazz (Ella Fitzgerald and Dizzie Gillespie's names appear); children at play; and clusters of pointed roofs that mirror the surrounding homes.

The mural also helped defined the site as a gathering place.

"It's saying a lot, like everyone should get together," said Cynthia Cardweil. Now 16, she has lived in the neighborhood since she was seven.

Johnson said that the Westminster Neighborhood Association holds its meetings in the playground when possible, to give it more exposure... and because it's a comfortable place to be.

Johnson said the mural expands the community as well, attracting people who live a mile or two away. People seem to respect the space. Johnson said that though the mural is close to the ground, there's been almost no graffiti or damage to it.

"What you see very clearly is that someone is watching over this space," Johnson said. "It's a comfortable place to be, an oasis. It wouldn't look so nice unless there was a community looking after it."

The message that public art sends is an integral part of how it contributes to a community, and artists pay heed.

Cheryl Foster recently completed a project about three miles north of the Westminster Playground at the Emery Recreation Center in D.C.

"It's not about you or what you can do personally," said artist Cheryl Foster. "It's sharing their vision. Helping them develop their vision. Digest what they said. From those words, I can come up with images."

The people who suggested the Emery Recreation Center art project wanted to send a message of excitement and welcome, with bright and inviting images. Since many seniors use the center, they also wanted the piece to be multigenerational.

A dedication for Foster's work -- "Emery, You Light up My Life" -- took place on July 8. A beam near the top of the work, spanning 60 feet, holds 40 figures engaged in various activities. The figures are made of waterjet-cut acrylic. Two columns divide three sets of images, with etchings of community members' photographs, also in acrylic. The faces range across age and culture. Both sets of acrylic are lit by multicolor LED lights in red, yellow, purple, green and blue.

"It says exciting things are going on here and that you're welcome," Foster said.

"The seniors love it. The kids love it," said Lewis "Coach Lew" Turner, who works at the center part-time. His face is one of those portrayed in the piece.

"The colors they chose give a friendly, open feel to the place," said Ray Campbell, who was visiting the Center to look at a space for his wife's baby shower.

As a child, Foster had made crafts at Emery, giving her a personal connection to the community center. She also recalls learning to count when she sold peanuts there as a Campfire Girl.

Sometimes such programs support a particular objective. The Mural Arts Program in Philadelphia started in 1984 with an anti-graffiti campaign. St. Louis created a bi-state Arts-in-Transit program in 1986 to generate excitement about another new community addition: light rail.

Marchand's mentor, G. Byron Peck, has done work in Los Angeles and Ottawa, Ill., just to name a few. He also has a non-profit organization, City Arts, that works with young people in the inner city to create murals.

In Los Angeles, the city's Cultural Affairs Department and the Social and Public Art Resource Center supported Peck's work on a 110-foot mural on West Pico Blvd. in West L.A., that included elements of Native American and Japanese culture.

For the "A Brush with History" program in Ottawa, Ill., Peck painted a historical mural of Civil War General W.H.L. Wallace.

While widespread, such art may not make an immediate impact on all who visit a public site.

Jesse Johnson sat in the lobby of the Emery Recreation Center talking to two other men. He said he had not really noticed Foster's work before because he was usually in a rush to drop off or pick up his sons, Matthew, 14, and Raymond, 13. On that day, he happened to sit across from it.

Meanwhile, at least one of those youngsters is paying attention.

"He certainly noticed it," Toro said of 21-month-old Tadeausz. "He told me that he saw the ball, the basketball player, the bird, the car and the horse. Things, I guess, that kids would see."