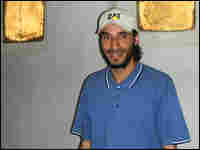 Back from Iraq: A fighter relaxes in Yemen. Special to NPR hide caption

This week on MORNING EDITION we're exploring the inner workings of al-Qaida. We've heard about the group's strategy and its public relations. Today, we have a portrait of a terrorist recruiter.

We learned the recruiter's story from Bernard Haykel. He's a New York University professor who spent many months in the Arabian peninsula studying jihadi groups.

Haykel recently traveled to Sanaa, the capital of Yemen, and that's where he met a man who let Haykel record their talk.

INSKEEP: The man was telling the professor about a career in holy war.

Professor BERNARD HAYKEL (Professor of Middle Eastern Studies, New York University): I just met him in a coffee shop. I mean, he walks about freely. This guy's a Yemeni and he has been part of the jihadi movement since he was 16 years old. He was recruited in the late 80s and fought in Afghanistan, initially, against the Russians, and then against some various Afghan factions - was with the Taliban.

He's sort of a professional jihadi. I mean, he's fought on many different fronts. He's also fought in Chechnya and Bosnia and Somalia and Yemen. In Iraq, I think he said he did two tours of duty, as he calls his stays there.

INSKEEP: Tours of duty, as though it were formal and military?

Prof. HAYKEL: Correct, yeah, yeah. And he sees himself as part of a very formal movement.

INSKEEP: How do you make a living for almost 20 years as a professional jihadi?

Prof. HAYKEL: I think that they live on handouts. You know, they have tremendous sympathy in lots of different places. His father's a middle class guy. I suspect his father has sponsored him or supported him for quite some time.

But you get the sense in talking to someone like that that it's a way of life. You know, it's a cause and it's a calling and this guy's fairly old among jihadis. I mean, he's in his mid-30's - very articulate, very calm, very collected, and someone who, based on his experience and based on his intelligence, I think, is very capable of recruitment, of encouraging a younger generation of people that is being formed now because of the war in Iraq.

INSKEEP: Did he look or sound any different than anybody else in that coffee shop, any other Yemeni?

Prof. HAYKEL: No. Well, he had slightly longish hair. He had a beard and he was wearing a Caterpillar hat - like a baseball cap. You know, very Americanized -T-shirt, jeans...

Prof. HAYKEL: Yeah, yeah. He had a Caterpillar baseball cap on and downplayed -you know, he said the Internet was important, but it's not the main vehicle for recruitment. He's not someone who does use the Internet much himself. A lot of his recruiting - a lot of his getting people to go to Iraq is done, really, in a face-to-face fashion.

INSKEEP: What more did he tell you about that process?

INSKEEP: You mean that if you're in Yemen, you might find other guys who'd been to Afghanistan and you've kind of got an Afghanistan old-timer's club, although their not that old-timers, and they go about their business.

Prof. HAYKEL: That's right. And they look around in mosques to see if there are potential recruits. Some of the new recruits that are going to Iraq are, you know, basically people who are inspired from the kinds of images that they see coming out of Iraq or coming out of the Palestinian territories. And so these people tend to be self-motivated and these recruiters are on the lookout for people like that.

INSKEEP: There must be in Yemen a great many fundamentalists Muslims who are opposed to the West, but who are perfectly peaceful in their beliefs. What do you think this man uses to get recruits to go to the next step?

Prof. HAYKEL: They have specific propaganda CDs and tapes that they use -images, videotapes, chants and personal stories and anecdotes, both from, let's say Afghanistan or Iraq, but also from earlier times in Islamic history.

These people are like teachers, you know. They are recruiters and indoctrinators and they use a whole array of material to bring people over to their side...

INSKEEP: I'm wondering about the videos that have been publicly seen and what kind of effect they would have on a person. For example...

INSKEEP: ...if you saw one of these videos of an American tank being blown up in Iraq, I'm not sure that would motivate me to rush off and blow up a tank somewhere. What is the psychological heart of this man's pitch, as best you could figure it out?

Prof. HAYKEL: His pitch is quite a simple one; basically, that the Muslim world is under attack by an evil and barbaric force represented by the United States, that innocents are being killed, that women are being raped and so on, and tortured. So there is that heartstring that is being plucked constantly.

There is this other element to their pitch which is that, don't be afraid of the imbalance of forces. Even though we don't have airplanes and tanks and the weaponry that the Americans have, ultimately this battle will be decided by faith alone. A lot of it has to do with theological indoctrination, getting people mentally oriented to be ready to die essentially, and to see this as martyrdom, to see it as a form of blessing.

INSKEEP: Did your acquaintance who met you in that coffee shop in Yemen say that he specifically recruited suicide bombers?

Prof. HAYKEL: Yeah. Oh, yeah. And very specifically, he was the one who handled two attackers who blew up the United Nations offices in Baghdad.

INSKEEP: That was in 2003? That was a very significant bombing?

Prof. HAYKEL: That's right. He was the one who got these two individuals ready and motivated, and saw them to the site.

INSKEEP: I have to ask - you've spoken to a man here who says he was in Afghanistan, he was in Chechnya, he was in other places, he was in Iraq, he fought with Zarqawi, he was part of this major bombing. Did you believe everything that he said?

Prof. HAYKEL: I was obviously fairly suspicious, initially. And I've been following this movement since the early 1990s, so I'm familiar enough with the details and the indoctrination, the ideology and so on, to realize that all of it fit. There wasn't anything that was jarring from what he said, from the details and the individuals that he met, the descriptions of roads and characters, events; everything was just absolutely spot-on.

INSKEEP: Mr. Haykel, how long did you speak with this man who said he was a jihadi recruiter?

Prof. HAYKEL: I spent a couple of days with him. I hung around Sanaa, went to restaurants with him. He came to where I was staying. And so I spent quite a bit of time with him. I photographed him. I taped him. I got a fairly good sense of what he's like.

INSKEEP: Did he give you his name?

INSKEEP: Are you free to tell us what it was?

Prof. HAYKEL: If you like. I don't think he's hiding it and it's well known to the American authorities as well as to the Yemenis. His name is Mohammed Hussein Sharab(ph) and his photograph is hanging inside the U.S. Embassy in Sanaa as a wanted man.

INSKEEP: Bernard Haykel is associate professor of Middle Eastern and Islamic Studies at New York University. He's just back from a visit to Yemen. Thanks very much.

INSKEEP: And you can hear this week's other conversations about al-Qaida strategy and terrorist public relations at npr.org.