Accessibility links
Gertrude Bell, a Masterful Spy and Diplomat The extraordinary British diplomat and spy Gertrude Bell was buried 80 years ago today. After World War I, she was almost single-handedly responsible for the founding of modern Iraq, where her grave is still located. 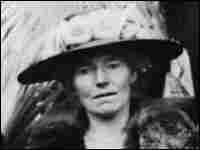 Gertrude Bell attends a meeting of the Mesopotamia Commission at the Cairo Conference of 1921. Other members of the commission include Winston Churchill and T.E. Lawrence (visible in enlargement). Hulton Archive/Getty Images hide caption 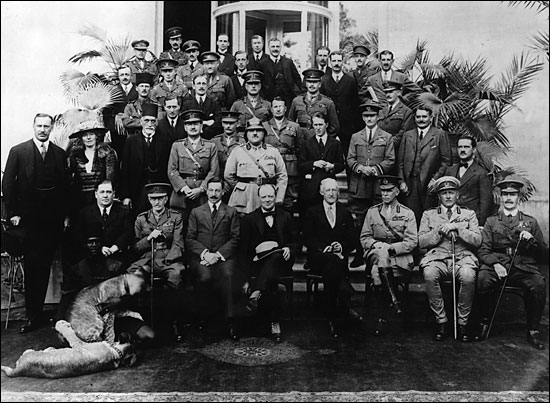 Gertrude Bell attends a meeting of the Mesopotamia Commission at the Cairo Conference of 1921. Other members of the commission include Winston Churchill (front row, center) and T.E. Lawrence (second row, fourth from right)

The extraordinary British diplomat and spy Gertrude Bell was buried 80 years ago today. After World War I, she was almost single-handedly responsible for the founding of modern Iraq, where her grave is still located.

Bell was the first woman to graduate with a history degree from Oxford and became one of the country's leading Arabists. She rode camels with the Bedouin in the Arabian desert and dined on sheep's eyes with tribal sheikhs.

Letters of Gertrude Bell, Circa 1920, Shed Light on Today's Crisis

The U.S.-led effort to bring stability and democracy to Iraq resonates with echoes of recent history. William Beeman is director of Middle East studies at Brown University and has written about the tumultuous period after World War I, when Britain and France divided the remnants of the Ottoman Empire. New countries emerged, including Iraq, forged by arbitrary political boundaries.

In 1920, Beeman notes, Sunnis and Shiites held mass demonstrations in Baghdad that quickly grew into a full-scale revolt. Several months passed before the British could regain control, and thousands of lives were lost.

Among the British nationals who helped establish Iraq was Gertrude Bell. Fluent in Persian and Arabic, she founded an archaeological museum in Baghdad. In letters home, Bell made detailed observations about the new country and its people. Today, U.S. and British leaders are finding new value in her insights. Her letters are circulated at the Pentagon.

Some excerpts from Bell's letters:

March 14, 1920: It's a problem here how to get into touch with the Shiahs, not the tribal people in the country; we're on intimate terms with all of them, but the grimly devout citizens of the holy towns and more especially the leaders of religious opinion, the Mujtahids, who can loose and bind with a word by authority which rests on an intimate acquaintance with accumulated knowledge entirely irrelevant to human affairs and worthless in any branch of human activity. There they sit in an atmosphere which reeks of antiquity and is so thick with the dust of ages that you can't see through it -- nor can they. And for the most part they are very hostile to us, a feeling we can't alter…There's a group of these worthies in Kadhimain, the holy city, 8 miles from Baghdad, bitterly pan-Islamic, anti-British…Chief among them are a family called Sadr, possibly more distinguished for religious learning than any other family in the whole Shiah world….I went yesterday [to visit them] accompanied by an advanced Shiah of Baghdad whom I knew well.

June 14, 1920: We have had a stormy week. The Nationalist propaganda increases. There are constant meetings in mosques where the mental temp. rises a great deal about 110. I enclose an exposition of the moderate party. The extremists are out for independence, without a mandate. At least they say they are, knowing full well in their hearts that they couldn't work it. They play for all they are worth on the passions of the mob and what with the Unity of Islam and the Rights of the Arab Race they make a fine figure. They have created a reign of terror; if anyone says boo in the bazaar it shuts like an oyster. There has been practically no business done for the last fortnight. They send bagsful of letters daily to all the tribes urging them to throw off the infidel yoke. The tribes haven't responded except with windy talk. I personally don't think there will be an outbreak either here or in the provinces, but it's touch and go, and it's the thing above all others that I'm anxious to avoid.

June 21, 1920: The second tale was … propos of the vaunted and wholly illusory union between Sunnis and Shi'ahs which was the feature of Ramadhan. "I got up at a gathering" said Mustafa Pasha "if the Prophet, God give him salvation, and the Khalifs Umar and Abu Bakr and the rest were here now, they'ld [sic] be on the side of the English." "How is that?" asked the company. "Because the English have united Islam." "You have no religion" they cried. But though meant as a compliment to us, or a gibe to them I don't know that we can get much satisfaction out of it.

June 12, 1921: We can't continue direct British control though the country would be better governed by it, but it's rather a comic position to be telling people over and over again that whether they like it or not they must have Arab not British Government….