Accessibility links
Pro-Israel Christians Lobby in Washington An Evangelical pastor from San Antonio has set out to form the first Christian political-action committee dedicated entirely to supporting the state of Israel. Pastor John Hagee hopes it will become the most powerful pro-Israel lobbying group in America. 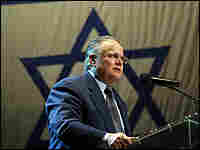 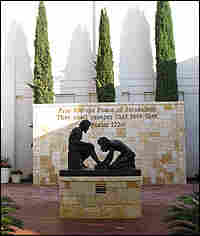 The stones of Cornerstone's replica of the Western Wall were imported from Jerusalem. Gaps were left in the wall for worshippers to insert prayers. Courtesy of Cornerstone Church hide caption 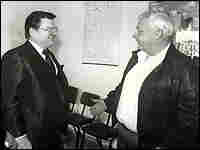 Hagee shakes hands with former Israeli prime minister Ariel Sharon in 1983. At the time, Sharon was just fired from his position as defense minister. Courtesy of Cornerstone Church hide caption

An Evangelical pastor from San Antonio has set out to form the first Christian political-action committee dedicated entirely to supporting the state of Israel. Pastor John Hagee hopes it will become the most powerful pro-Israel lobbying group in America. This week, Hagee and thousands of leading pro-Israel Evangelicals will come to Washington, D.C., to make their case before Congress.

A single caramel-colored stone wall stands outside the entrance to Cornerstone Church in San Antonio. Along the top runs an inscription that reads: "Pray for the peace of Jerusalem, they shall prosper that love you." It's from Psalms 1:22 and one of Hagee's favorites.

"Each of these stones is from Jerusalem, and we left a gap just like there happens to be at the Western Wall, so people can put their prayer requests on paper and push it in there," Hagee says.

Just a few steps from the wall is a corridor that leads into his office. The corridor is a portrait gallery, most likely the only one of its kind in Texas -- if not America. Each framed painting depicts one of Israel's former prime ministers.

The entire Cornerstone campus is a tribute Israel. The country's flag adorns the walls and halls, and affixed to the frames of many doors are Mezuzahs, cases filled with a prayer and usually found in Jewish homes. The banners of the 12 Tribes of Jacob decorate the prayer sanctuary.

Hagee preaches this to his 20,000 congregants and the millions of home viewers he reaches each week in his televised sermons. He illustrates his point by noting passages from Genesis and Luke.

Hagee has known every Israeli prime minister since Menachem Begin -- with whom he used to discuss Scripture -- and he has visited the country 23 times. In Israel, he came to a simple conclusion: Pro-Israel advocacy should be a primarily Christian cause. It was then he decided to form Christians United for Israel.

"We are going to go to Washington and go face-to-face with senators, representing Israel," Hagee says. "We've never done that before."

Hagee calls it "biblical advocacy," an idea that has attracted prominent Evangelicals like Gary Bauer and Jerry Falwell to join Hagee. A "biblical advocate" for Israel believes the borders of the country were set by God and should not be altered. It's a view at odds with the majority of Israelis who are prepared to trade land for peace, but, Hagee promises, the group won't intervene in internal Israeli politics.

His commitment to Israel, he says, is a divine mandate, and Hagee's Cornerstone Church takes that belief very seriously.

It's the 25th year Hagee's put on the gala. When he came up with the idea in 1981, he couldn't persuade any mainstream Jewish leaders to attend, although he pledged he wouldn't proselytize to Jews. Hagee says he discourages that to this day.

Yet some Jewish leaders were suspicious. Many still are. But not Rabbi Aryeh Scheinberg, the leader of San Antonio's small orthodox community. Since Scheinberg first decided to attend the event, he and Hagee have become close friends.

"We've suffered a great deal from the Christian faith, but these Evangelicals are genuine," Scheinberg says. "They're sincere. Their love for Israel and love for the Jewish people is rooted in the Bible that they believe."

It's a nice thought, says Rabbi Barry Block, but not enough to change his mind about Hagee. He's long encouraged San Antonio's Jewish community to keep its distance, in large part because Block believes Hagee's social agenda -- such as his stance on the separation of church and state -- is simply one he cannot endorse.

"They do not have a mainstream agenda and their engagement with us on these Israeli issues might suggest to other Americans that we countenance them as part of the American mainstream. We should not," Block warns.

As head of the liberal Reform Jewish community in San Antonio, he is unimpressed with Hagee's theology.

"Pastor Hagee espouses an end of days theology in which our Jewish people don't fare well at the end of the story unless we convert to Christianity," Block notes.

"I think there's no greater fallacy out there than the one that claims Christians support Israel simply to speed the Second Coming."

He admits the messianic "End of Days" scenario in Christianity is very different from the Jewish one. The Jewish view holds that the Messiah has yet to arrive. Christians believe he will eventually arrive for the second time. Both believe the process will be violent, bloody, and generally unpleasant, but when it’s over, a "Golden Age" of peace will settle over the Earth.

Still, Brog knows that many American Jews who are politically liberal will feel uncomfortable with Hagee's movement. For his part, Hagee says he understands why.

And besides, he adds, it doesn't matter whether some Jewish leaders steer clear of Hagee's movement. "I candidly do not care what they think," he says. "I'm only concerned with what God thinks."