Accessibility links
Hotel Tycoon Eyes Affordable Space Vacations Some 300 miles up, an experimental capsule has puffed up and unfolded its solar panels. It's a prototype for a new kind of rental property, funded by an American hotel tycoon. 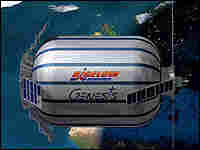 Some 300 miles up, an experimental capsule, like artist's conception shown here, has puffed up and unfolded its solar panels. Bigelow Aerospace hide caption 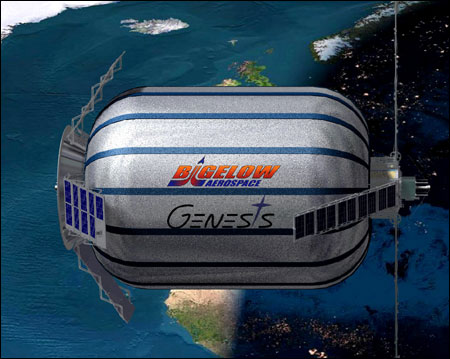 Some 300 miles up, an experimental capsule, like artist's conception shown here, has puffed up and unfolded its solar panels.

Nine astronauts are circling the Earth in the International Space Station. For years, the station has been the only place to stay in space -- but just astronauts and a few rich tourists have had the chance.

But now that's changed. An inflatable capsule, a sort of balloon the size of a bus, started orbiting the planet Wednesday. It's called Genesis I, and it was launched by a hotel tycoon who wants to build budget accommodations in outer space.

Robert Bigelow made his fortune on a hotel chain called Budget Suites of America. He's taken that idea to new heights with Genesis 1.

"[Genesis 1] is a baby one," he says. "This is about 15 feet in length and it's about 8 feet in diameter when it's expanded. It's sort of the shape of a watermelon, perhaps, you might say."

That big watermelon is now 300 miles up. Bigelow says it's been an emotional experience to know that Genesis 1's solar panels unfolded and that it puffed up properly. He says it's like the birth of a new child.

"It felt like becoming a parent. And other people here on the team felt that same way. I mean, people had tears in their eyes, I had a tear or two in my eyes,

This was the culmination of a long dream. The whole time Bigelow was building hotels in Arizona, Nevada and Texas, he was secretly hoping to build in outer space. Then, seven years ago, he told his wife that he was starting a new company, Bigelow Aerospace.

"I said, 'Oh, by the way, this is what I'm gonna really devote myself to,'" Bigelow says. "And so she thought 'Well, okay, we'll see.' You know, it might be a passing fancy."

It wasn't. Bigelow plans to invest $500 million in this venture. He has a giant facility in Las Vegas and more than 100 employees. His goal is to build an orbiting complex of rooms that can be used by private companies, foreign countries or tourists -- a type of public space station.

"We stand on the shoulders of a NASA program that was cancelled called TransHab," he says. TransHab was proposed back in 1997 as a possible crew quarters for NASA's space station. Congress eventually told NASA to stick with traditional aluminum cylinders, rather than spending money to develop inflatable technology.

But Bigelow says inflatables have advantages. He says his balloons are actually less likely to get damaged by space debris, because the shell is made out of layers of tough materials, like a bulletproof vest.

And it's much cheaper to launch something small that expands than to launch a big, rigid structure.

"Our first plan over the next five years," he says, "is to try to get good at what we're doing, try to understand these expandable systems, try to launch maybe six to 10 of these spacecraft. And then be able to launch full-scale."

The full-scale capsule is around three stories tall -- much bigger than the prototypes. George Whitesides of the National Space Society, a group that promotes space exploration, says the full-scale ones are impressive.

"I've been inside the full-scale versions of Bigelow's space hotel, and it is huge," Whitesides says.

Other entrepreneurs are building small rockets and spaceships that will give people a way of getting into space, Whitesides says. But only Bigelow is working on building somewhere that people can stay and enjoy it.

"You've got this expansive space to float around and to fly in, and so you can experience the true wonder of weightlessness," Whitesides says. "You're not bouncing around this little tin can. I think people are going to love it."

Genesis I will zip around the Earth for three to five years before burning up in the atmosphere. Another prototype will launch this fall. For that launch, the company is selling the chance to "Fly Your Stuff." It costs $295 for each small item or photo you want to send up into space.