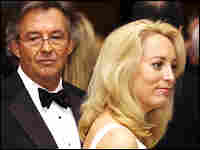 The suit accuses Cheney, Rove and Libby of a conspiracy to hurt Plame's career. The disclosure of Plame's identity as a CIA official was made in a newspaper column by Robert Novak. Wilson had previously spoken out against the Bush administrations claims that Iraq was stockpiling weapons of mass destruction.

The lawsuit alleges "an anonymous whispering campaign" meant to retaliate against Plame and Wilson. The CIA had sent Wilson to Africa to investigate the possibility that Saddam Hussein was seeking "yellow cake" uranium there.

Despite Wilson's conclusion that the story had no merit, President Bush cited it as proof of Iraq's escalating danger in his 2003 State of the Union address. Wilson then wrote a column for the New York Times in which he reiterated that the claims were false.

Karl Rove has been questioned about his role in the disclosure of Plame's name, but he was not charged. Libby has been indicted for allegedly lying to FBI investigators and a grand jury about the case.